Home » Our most recent articles » A day trip to Enoshima

Having been to Kamakura on an earlier visit to Tokyo we decided this time to take a day trip to Enoshima.   It’s located in Kanagawa prefecture and only 8km along the coast from Kamakura.  Enoshima is an easy day trip from Tokyo taking about 70 minutes to get there on public transport.  In the summer the beach is a popular getaway from the city but at any time of year there is plenty to see and do here.

I think I was looking forward to the trip down to Enoshima almost as much as getting there after I heard about Shonan Monorail.  It runs from Ofuna into Enoshima but this is no ordinary monorail it hangs suspended from the overhead rail as it makes its way towards the coast.  The carriages pass so close to the homes and roads below that you almost expect to brush the top of something along the way.  No reason to be concerned though, it’s been operating safely since 1970, almost 46 years as I write this.

We took a JR train as far as Ofuna (Y800 and around 40 minutes), this part is covered if you’re using a JR Pass.  The monorail runs the remaining 10km (Y310 15 minutes).  If you prefer not to use the monorail you can stay on the train to Fujisawa and then take the Enoshima Electric Railway train the rest of the way.  The cost and time is about the same as neither form of local transport is covered under the JR pass.

While in Ofuna you can get good views of the enormous Kannon statue on the hill from the station.  If your timing is right you can walk up to the temple but it doesn’t open until 10am as we found on the gate when we tried. 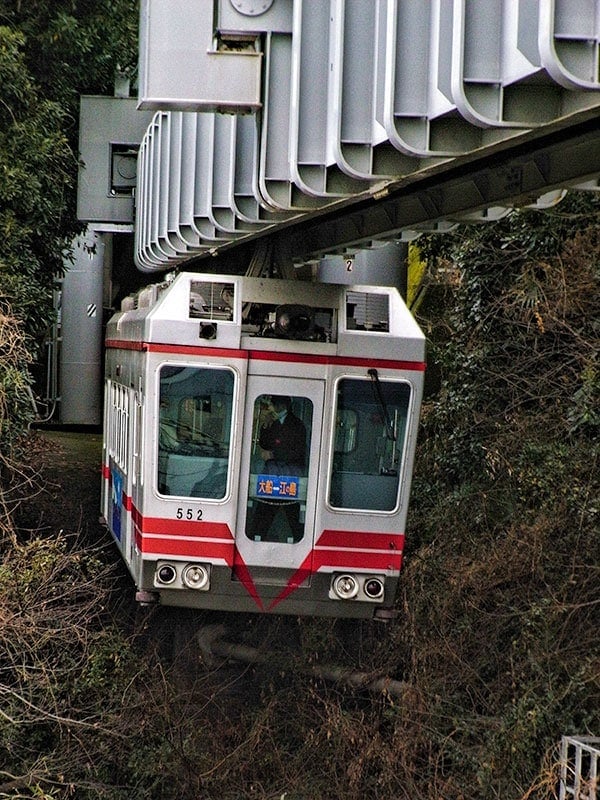 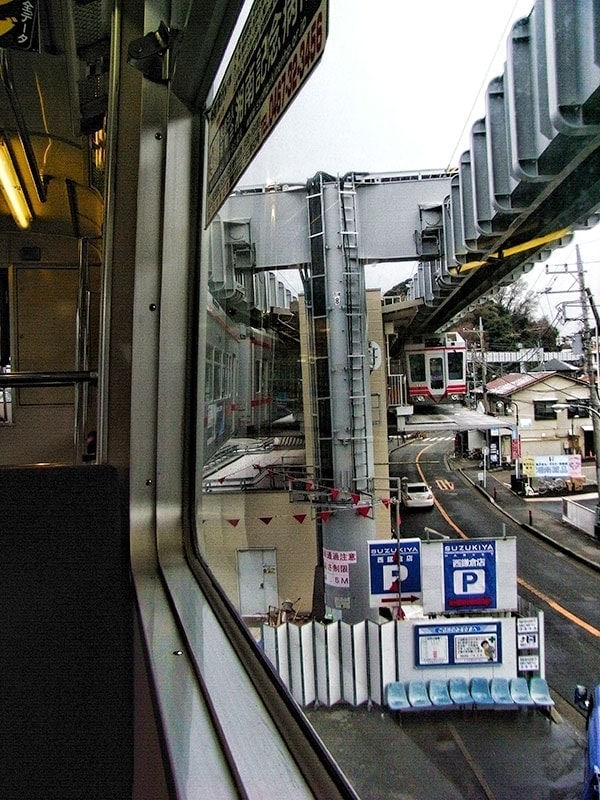 What to see on a day trip to Enoshima Island

Heading across the 600m causeway to Enoshima Island we started to wonder what the day had in store for us.  Light snow flakes then a rain shower started to fall on us.  It soon cleared but we did admire the perseverance of locals zooming around the sheltered side of the island with their jet skis dusted in snow.  That’s serious dedication to your sport.  In better weather the beaches between here and Kamakura are crowed with locals and others who head down from Tokyo at the weekend, at this time of year they are quiet, almost deserted and well suited to a contemplative walk on the sand. 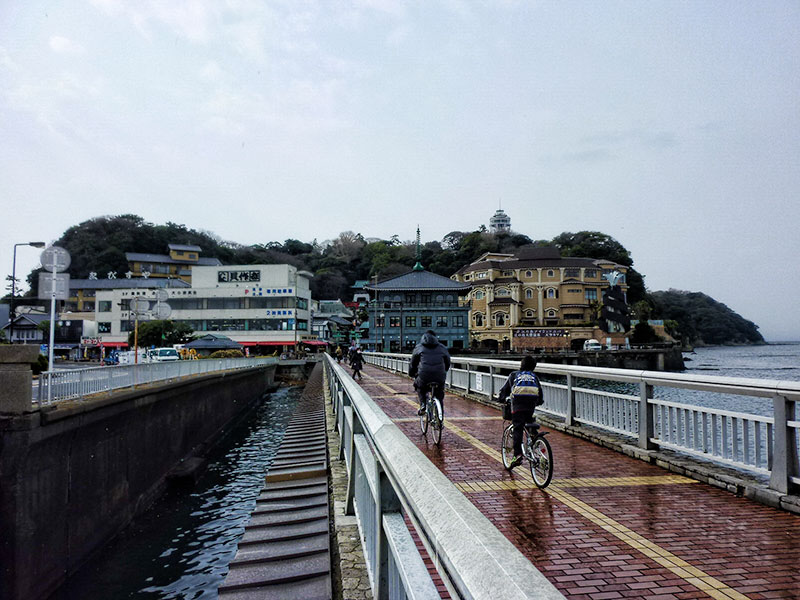 When you first arrive onto the island there’s a small town containing the spa building on the far right of the photo above, a variety of places to eat and many souvenir shops.  After you pass through those you’ll come to a tori, a red shrine gate marking the entrance to a sacred space.  Entry to the island and most parts of it is free but there are a few attractions and the unique elevators that carry you up the northern side of the island that do charge a small fee.

There is a day pass you can buy for Y1000 which lets you use the escalators cutting out a lot (but not all) of the hill climbing and gives access to the observation tower, gardens and the caves on the seaward side of the island.  Alternatively you can pay for tickets to only the parts you want to access.  There are several sets of long escalators that climb to the top of the island (Y300) and although I felt a bit lazy buying the pass it was worth it in hindsight.  If you do use the escalators it’s worth detouring off them to the lookouts to take in the amazing views back over the yacht harbour and along the coastline.

Enoshima shrine is dedicated to the goddess Benzaiten and rather than the island being one single shrine it’s actually 3.  Benzaiten is one of those figures that appears in both Shinto and Japanese Buddhist history.  Also shrines sometimes have more than one dedication in this case they are all dedicated to Benzaiten but also each to one of three Shinto sea goddesses.

The first shrine you come to is  Hetsu-no-Miya Jinja, this was established in 1206 and in the octagonal hoan-den it houses a statue of Benzaiten.  This is the only part of the shrines you need to pay an access fee to visit (Y200). 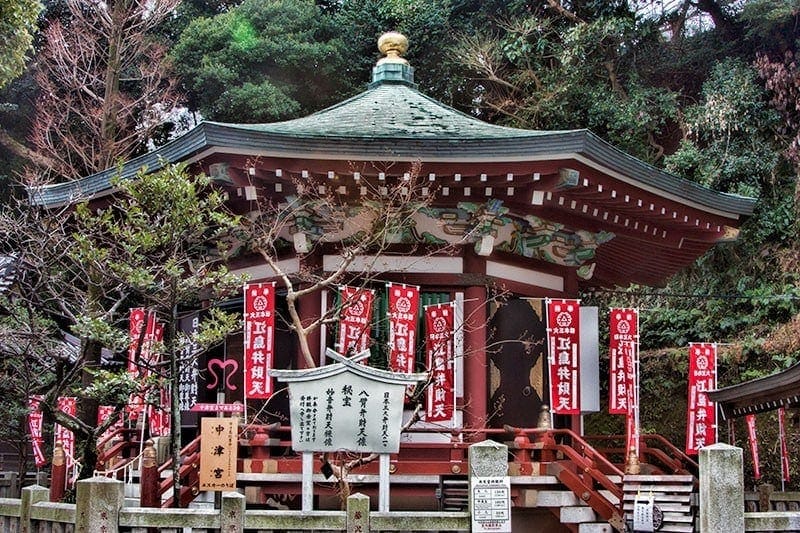 The second shrine a little further on is Nakatsu-no-Miya-Jinja and is the oldest of the three established in 853 by the Buddhist monk En-nin.  At that time in Japans history the merging of Shinto and Buddhism in was was common.   The frieze above the door features dragons (lizards) and turtles common on the island. 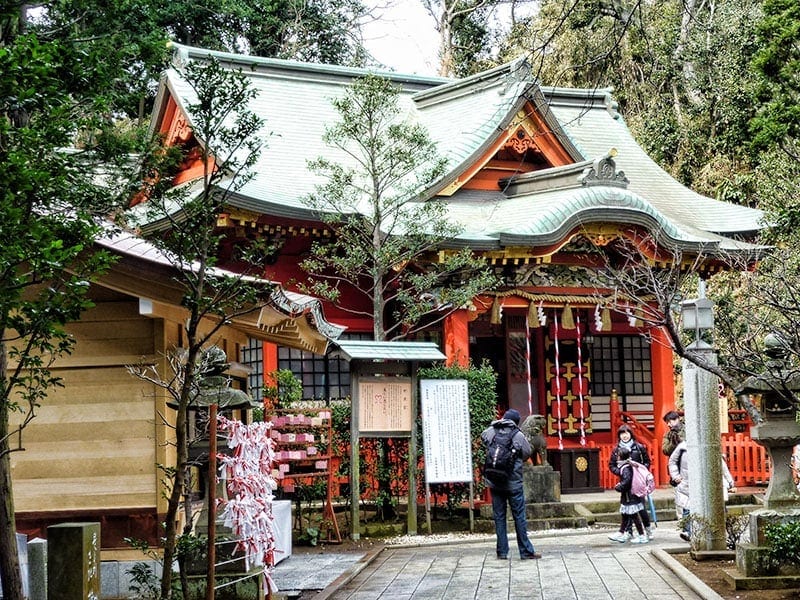 The final shrine is Okutsu-No-Miya-Jinja or shrine of the deep which represents the legend that the sea goddess spends winter in the cave below only returning to the shrine in the summer months. 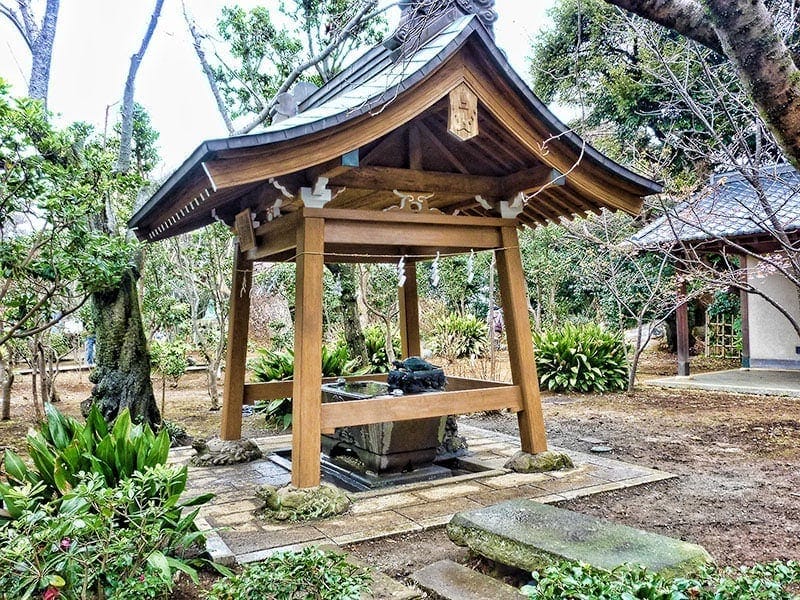 Samuel Cocking was a British merchant who at one time purchased most of Enoshima Island in the name of his Japanese wife after its confiscation by the Meiji Government under the Shintoism and Buddhism separation order.  The botanic gardens have different displays during the year and has an entry fee of Y200.  While we were there the display was a stunning early display of tulips.

Also within the garden area is the Enoshima Sea Candle, an observation tower shaped like a lighthouse. Entry to the viewing tower is Y300.  We were there shortly before Valentines day and it seemed a really popular place for young couples to come to after hanging a pink ema tablet in the first shrine.  Benzaiten is the goddess of everything that flows like the tide, writing, music and love which may explain the popularity of her island and shrine to young dating couples. 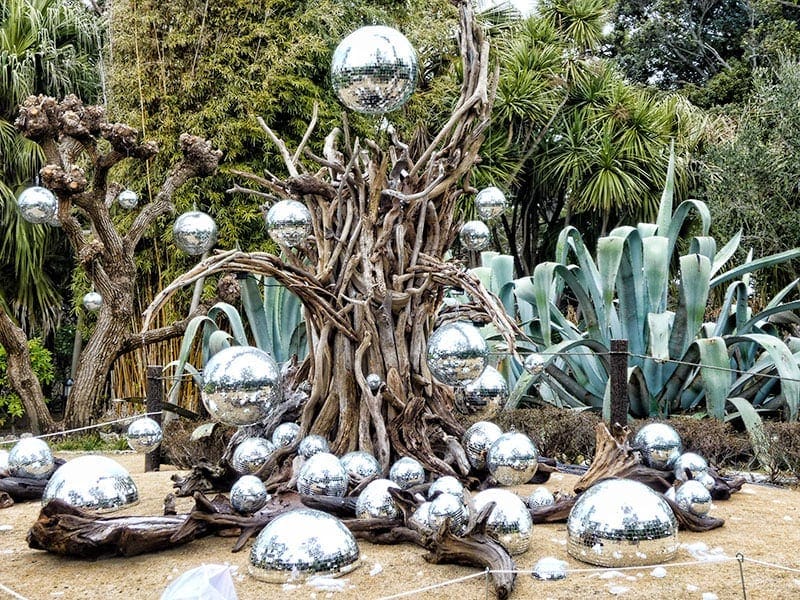 I think it’s about 250 steep steps down, and back up from the southern side of Enoshima Island.  If you have limited mobility this may be a bit difficult but otherwise I wouldn’t miss it.   Of course the caves access is down here but you’ll also find interesting rock shelves that sit just above the water level creating rock pools and other formations.  From this side and the lookout stops on the way down you would often be able to see Mt Fuji but on the winters day we visited the cloud was way too low. 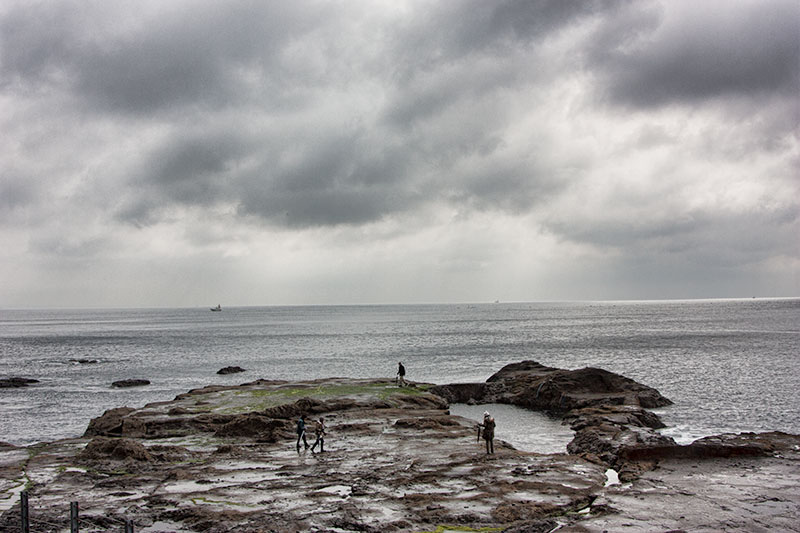 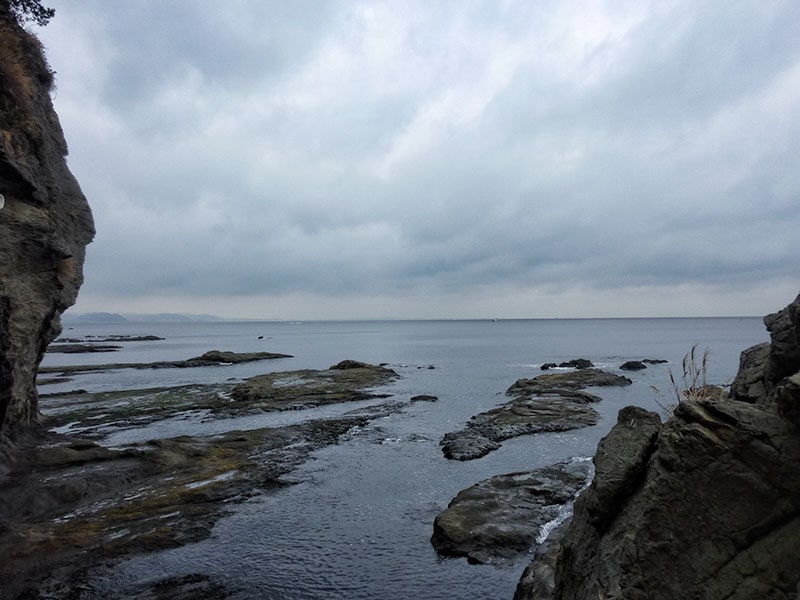 On this side of the island peer into the tide and see if you can spot Kameishi.  Kameishi is the ‘Turtle Stone’ that is about to swim back to the place of the Dragon god.  During high tide he’ll probably be hidden under the waves but we were lucky enough to spot him easily. 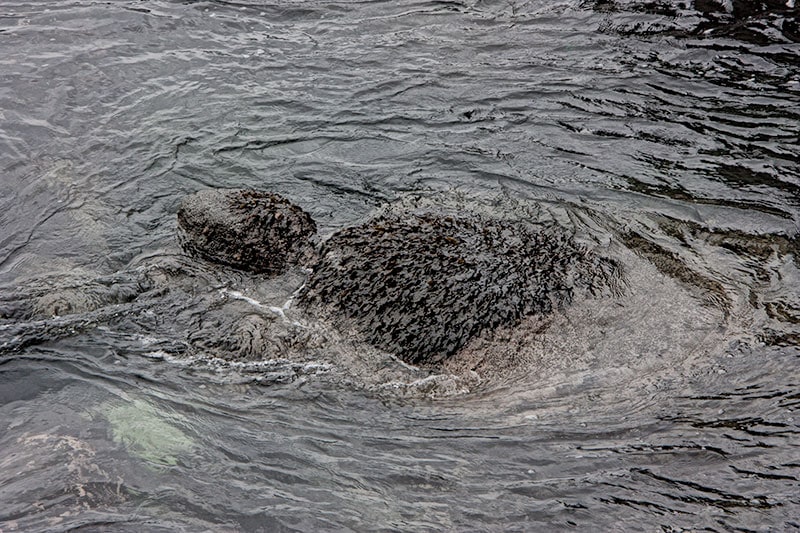 On the far side of the island are the Iwaya caves, there is an entry is Y500 or it’s included in the day pass.  Be aware that the caves are very touristy and you need a bit of imagination to see beyond that to their fascinating history.  The caves were originally eroded by the sea but over time earthquakes and other ground movement elevated it above the high tide mark.  The legend says that 1500 years ago a spiritual adviser to the Emperor suggested a shrine be built at Iwaya caves.  Over the centuries that followed many senior monks, influential samurai end even the Emperor himself made pilgrimages to the cave shrine.  Over time it became a popular tourist destination and in relatively recent years safety concerns have seen changes made that substantially altered the natural appearance of the area.  Rock netting has covered the cliff and inside the caves to prevent injury from rockfall and a concrete walkway and hand rail have been installed.

As you enter the first cave you will be given a candle, most of the tunnel is well lit but to see detail deeper inside the candle will be useful.  At the entrance there are photos showing the caves visitors over time and attesting to some of its more recent history, there are information boards here but not much of the information is in English.  The first cave contains statues of the Buddha and splits in two heading deep into the cliff, the first fork contains a number of statues representing the islands goddesses, the second is shorter and houses a statue of the sun goddess, Amaterasu.

As you leave the cave you follow a walkway around and will come to the second cave, this one is connected to the legend of Enoshima which says that villagers on the mainland were terrorised for thousands of years by a dragon.  During an earthquake in the 6th century the goddess Benzaiten caused Enoshima Island to rise from the sea and made it her home.  The dragon fell in love with Benzaiten but she rejected him for the way he had behaved toward the villagers, he was deeply ashamed and turned himself to stone near his love forming Dragons Mouth hill.

In the second cave you will find a pond and a statue of the now well behaved dragon who became a guardian of the fishermen.  This cave is a bit glitzy for my taste with flashing purple lights around the pond but the history is interesting especially when you  consider the natural events that are preserved and recorded within the legend.

If you have an interest in caves but the Iwaya caves are too touristy for your tastes I found the Benten-kutsu cave in Kamakura beautifully maintained but true to their origins, they are worth a visit if you have time to head into Kamakura.

From here head back up the stairs past the shrines, there are some restaurants along the way on this initial climb up the cliffs.  If you have the time you might look around the Enoshima area as you head back to the station.  We found a temple with an amazing display of bonbai (bonsai ume plum trees), there’s also an aquarium and it’s just a short ride into Kamakura from here.

You can pin these, or any photos in this post, to your Pinterest board for future reference 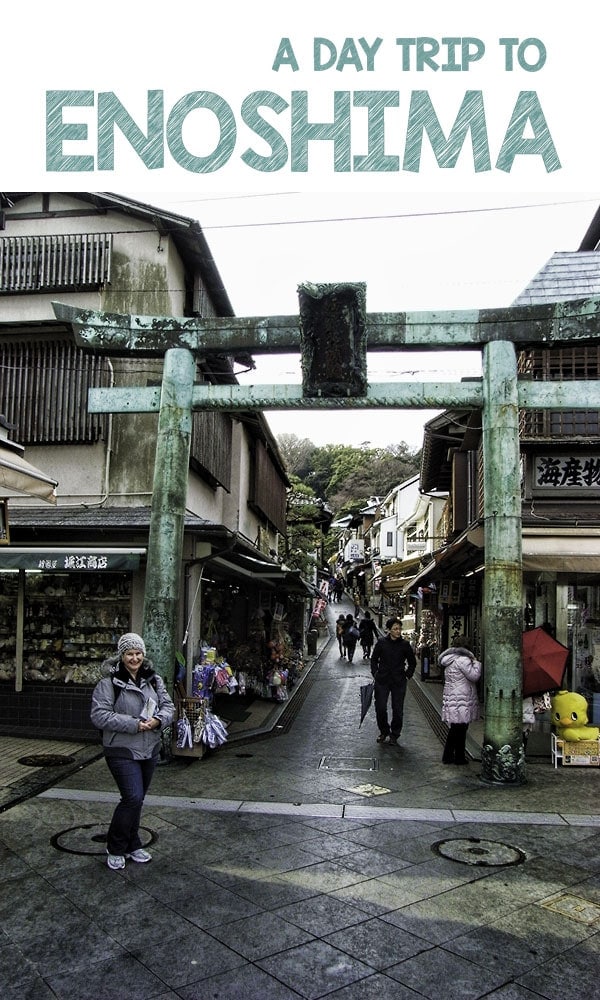 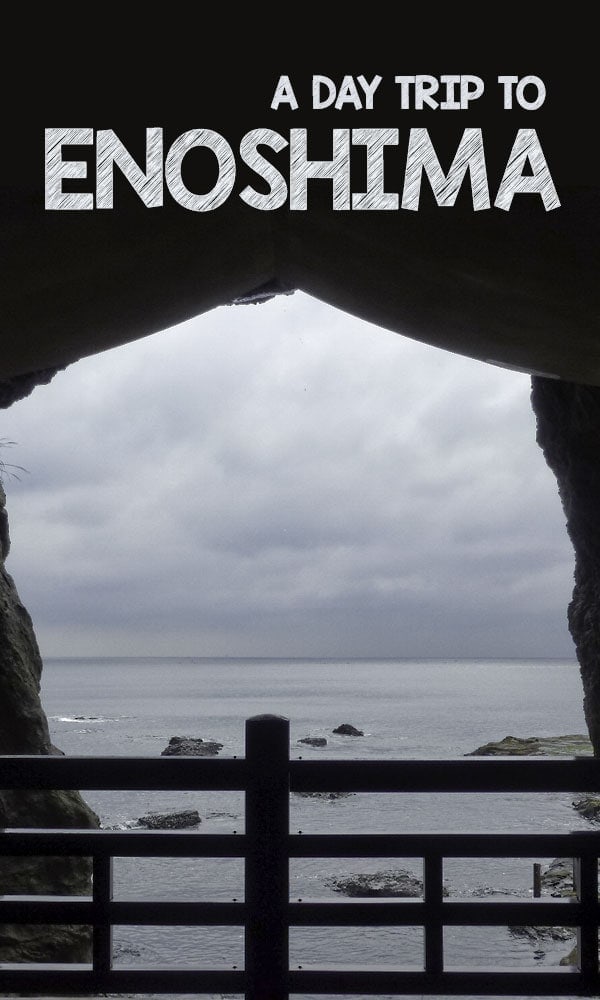 Have you considered a day trip to Enoshima?  If you’ve been or have any questions we’d love to hear from you in the comments below.