Ask a local where the best place is for autumn colour in Osaka and you’re likely to hear ‘Minoo Park’.  It’s a short train ride from the city into the suburbs but well worth it for a nature escape and some of the best leaf colour around.  While the area is really popular with locals it’s a little off the tourist trail so it makes a welcome respite from the busy city.

Minoo is most known for its colourful fall foliage but this would be a gorgeous spot to visit at any time of year if you have a half day or more available.  The walk from the train station along the river through the valley and up to the Minoo Waterfall is about 3 km and it’s a good easy walking path all the way.

>> MORE IDEAS OF THINGS TO DO IN AND AROUND OSAKA <<

To get to Minoo Park you travel from Umeda to Minoo station using the Hankyu Railway.  You take two trains, the first to Ishibashi which is a 15 minute trip on the Takarazuka line then switch to the Minoo line for an additional 5 minutes.  With a couple of minutes in between to change trains, it’ll take around 25 minutes all up.  Like most visitors I avoid transfers where possible but this was very easy and didn’t really add any complexity, making the change in a quieter interchange station does help.  The full trip (one way) costs Y270 so it’s very reasonable. 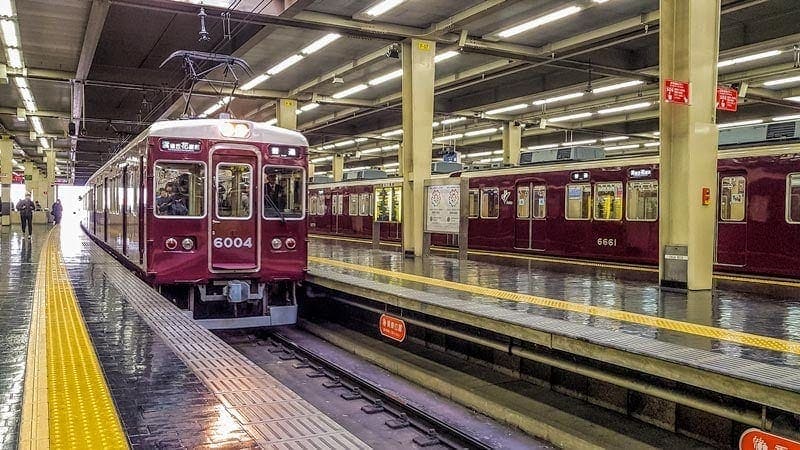 Hankyu is a private railway that connects Osaka to places like Kyoto and Kobe providing access to some other destinations along the way.  Minoo Park, for example, is really simple with Hankyu Railways but not so much with JR.  You do need to use multiple railway and subway systems in Japan which is why we always use an IC card such as the PASMO, ICOCA or SUICA when travelling here.  You top them up with cash then just touch on and off at the various stations and transport options.  They all work the same across the country now and avoid the need to deal with individual tickets.  We’ve had ours for 8 years now and just top them up when we need to, alternatively if you don’t plan on travelling back to Japan in the future you can get the small issue fee and any balance refunded before you leave. 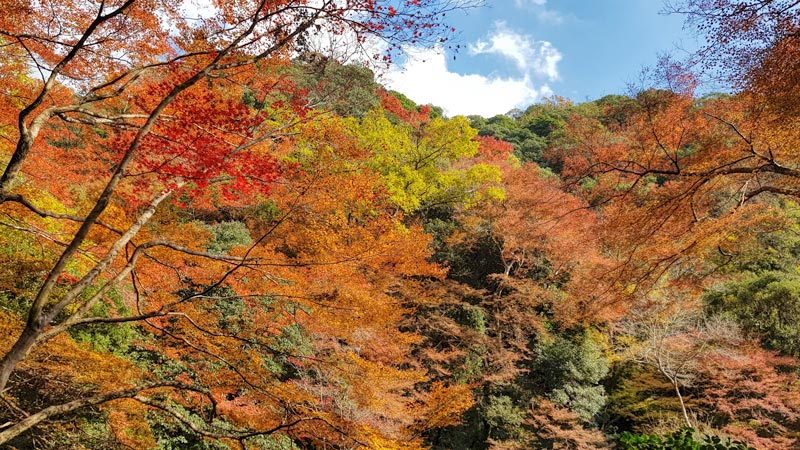 The full name for the recreation area is Meiji-no-mori Mino Quasi-national Park and it was established in 1967 along with a similarly named park in Takao in Tokyo. They were established as part of the centennial celebrations to commemorate Emperor Meiji’s accession to the throne.  Prior to that it was designated as an Osaka Prefecture Park in 1898 which is when it was opened to the public.

The park is 963 hectares in size and is significant for its Mesozoic Era (think while dinosaurs still roamed the earth) geological formations and extensive wildlife, birds and insects.  This is one of the places in close proximity to a major city where you may see wild monkeys (Japanese Macaque) so keep your eyes open in the trees especially on the quieter paths.  We weren’t lucky enough to spot one here ourselves but they are seen relatively frequently.

From the station take the narrow road leading away up the hill, this is called the ‘Falls Path” and takes you into Minoo Park and eventually to Minoo Falls on foot.  We suggest picking up drinks, snacks or picnic lunch options to carry with you on your hike while you’re still in the city.  While there are some shops and restaurant options they’re very limited once you get into the park itself and there weren’t as many choices as we expected at Minoo station. 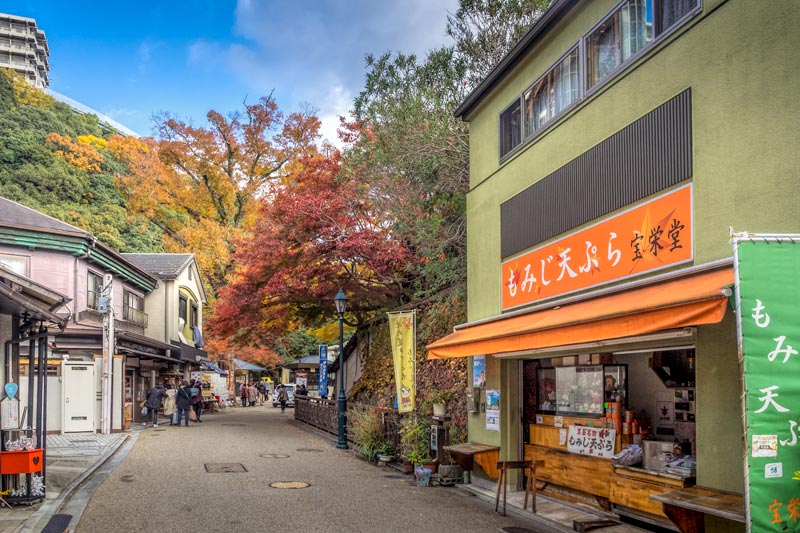 The narrow road from the station to the park has a number of small shops and eateries along it.  We did spot someone pulling a fresh batch of chestnuts from the pressure roaster as we passed so stopped to buy a bag to eat on our walk.  If you haven’t had chestnuts before they’re a tree grown nut but need to be cooked to eat them.  They then have a dense but fluffy texture and a flavour that’s similar to a sweet potato or a New Zealand yam. They’re delicious and an excellent snack for hiking because they’re filling and as a low-glycemic carb they help maintain stable energy levels.

In the early section where the shops are there’s a double back with a road that leads uphill back in the direction you have come from.  It’s about a 5-minute walk up here to a local temple called Shotengu Saikoji.  Walk up the stairs to enter the temple.  It’s only small but very peaceful and calm and they’ve provided a small covered seating area.  Set beneath all the coloured leaves it’s very pretty. 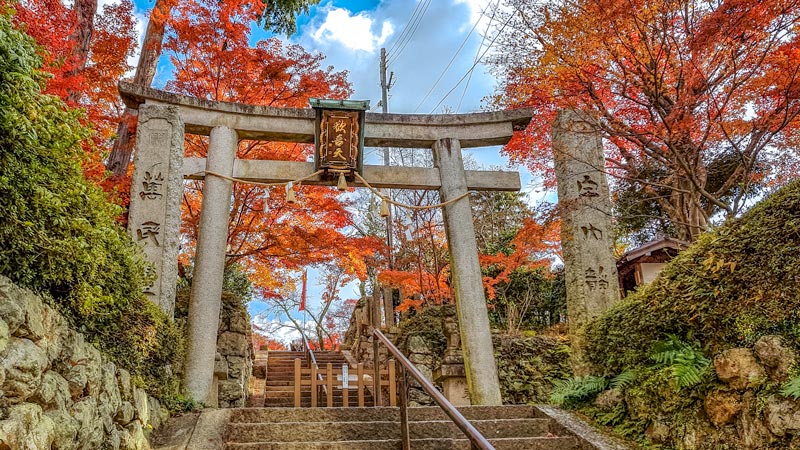 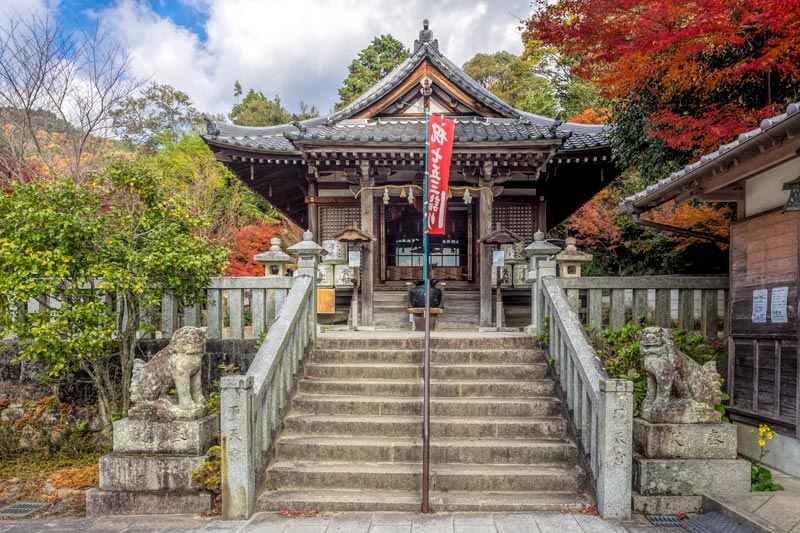 We were the only ones in the temple grounds in the mid-morning but I noticed the lady in the office look out and smile at me.  I’m guessing this temple is often overlooked by foreign visitors on the way to the park.  We enjoyed it a lot so I decided to add the temples seal to my shuinchou (朱印帳).  I don’t get it completed as often as I did on our early trips but it’s the only physical thing I regularly collect on my travels here and I still like to carry it and add special memories.

You follow the river up through the valley on a sealed path so it’s impossible to take a wrong turn.  Along the way you’ll pass Ryokan, temples, shrines and somewhat unexpectedly, an insect museum. 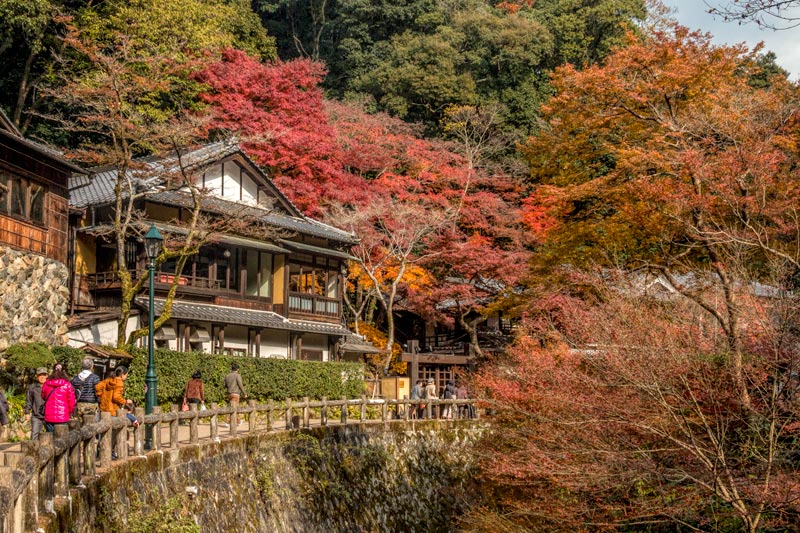 As we entered the park itself there’s a stream bubbling through to join the river, a seated area and toilet facilities.  I’d suggest making use of them as they are the last ones you will see for awhile and they’re clean and well kept as public bathrooms generally are in Japan.  The seats were comfortable and we decided to make use of them to eat our chestnuts while they were still nice and hot from the oven.  This is when they are at their absolute best.

Around halfway along the path you’ll see a bridge across the river to your right.  This is a short detour if you want to take it that offers good views over the Minoo Valley and through to the city skyscrapers on a clear day.  The path is partially unsealed on this side and a little steeper but still easy walking unless it’s very wet and muddy. 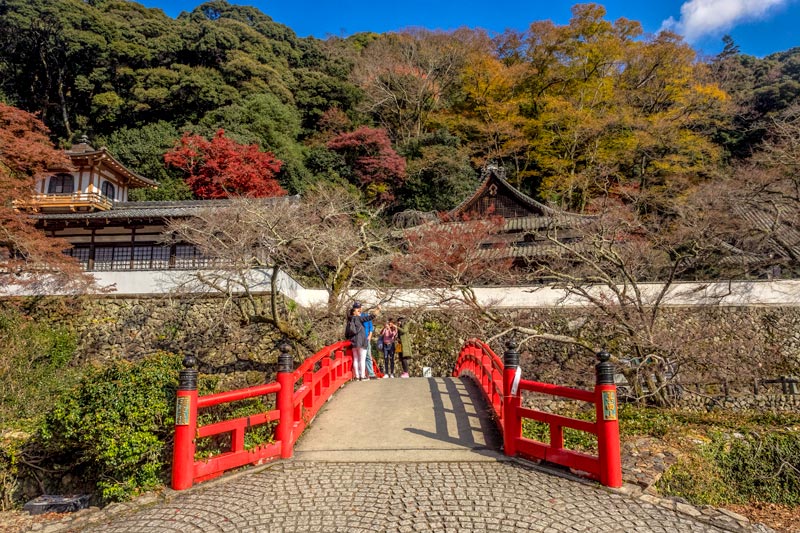 The most famous temple in the area is Ryuan-ji with a history dating back to the 7th century when it was founded in 658 by the ascetic monk En no Gyoja although at that time the temple was known as Minoo-dera,  Upon gaining enlightenment on the site the monk carved a statue of Benzaiten thought to be the first image created of her likeness in Japan.  A statue of the goddess can be seen up the stairs towards the back of the temple. 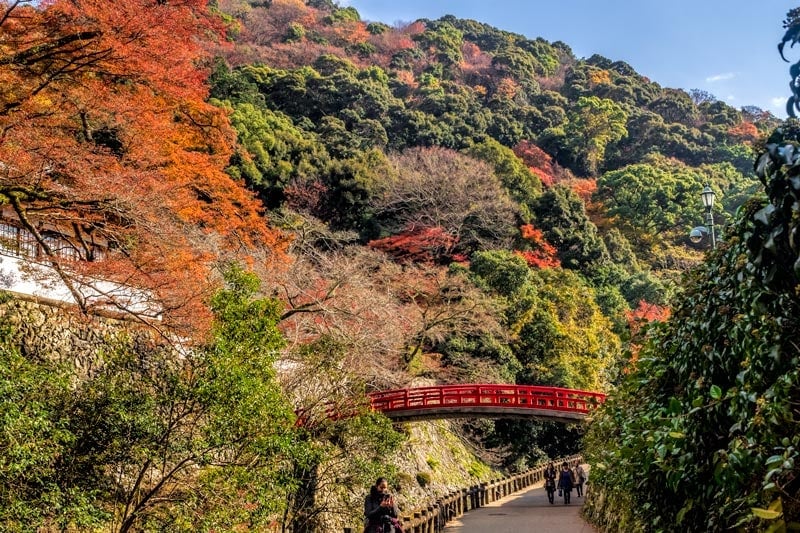 The temple is also associated with luck and it’s said the origin of the lottery started here 1000 years ago.   It’s not a large temple but is a pretty and serene spot to spend some time about halfway between the station and the falls. 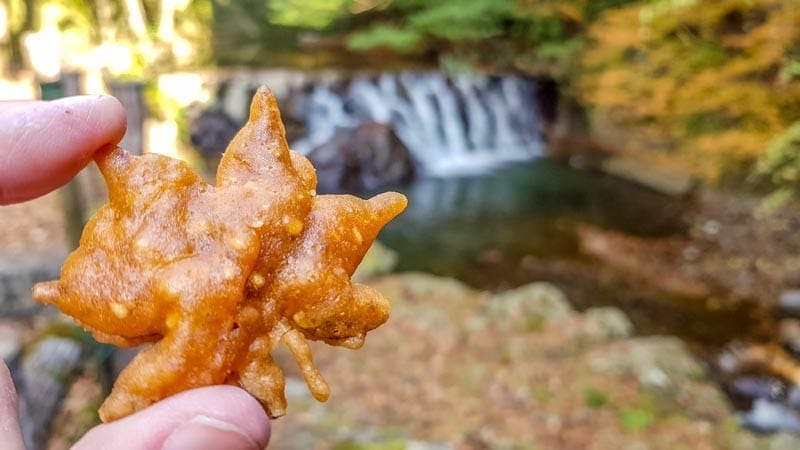 Another food that is considered a specialty in Minoo is tempura maple leaves.  Like the chestnuts you ideally want to find a restaurant or small shop that is cooking them fresh close to when you want to eat them, they are at their best when fresh and crispy.  While there is a leaf inside the tempura they really don’t have a flavour from it, you taste the light and crispy tempura batter mostly but it’s an interesting local delicacy to try out while you’re here.

We bought ours from the restaurant at the top not far from the falls when we stopped to buy a drink from the vending machines.   We’d also seen the tempura leaves for sale at the shops and restaurants closer to the station earlier in the day so there are a few places to buy them locally although I’ve not seen them anywhere else.

Unfortunately, at this point we came to a gated off section of the track and found that the final short distance down to the falls viewing area was closed following damage to the track and infrastructure during a late summer typhoon in 2017.  (Please see the info box at the bottom of the page for updates on its reopening)

I’m sure we would have known of the closure earlier if we’d been able to read Japanese as there were a few temporary style signs near the start and at the temple.  We could hear the crashing water from here but sadly weren’t quite able to see it.  By all accounts, it’s very pretty and given the lovely fall colour we’d enjoyed on the way up I’m sure it would have been quite spectacular that day.  While it was disappointing not to see the waterfall after our walk I would still have chosen to do it even if we’d known they were closed.  We thoroughly enjoyed our day.

With nowhere further to go we headed back down and found a table beside some smaller cascade falls to enjoy our tempura and drinks.  The return walk is down the same path but with so much to see it was just as interesting on the way back.  The afternoon light was perhaps a little better for enjoying the leaf colour than the harsh morning sun although the camera did struggle with the deep shadows and bright patches. 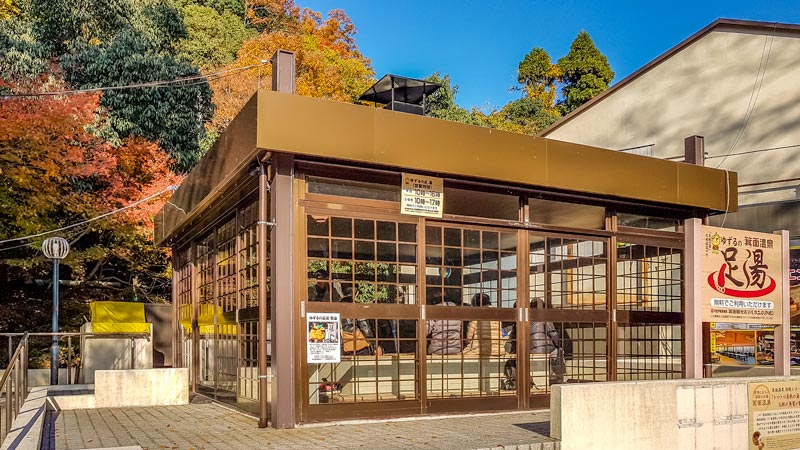 We’d noticed the public foot onsen on the way to the park and hadn’t paid too much attention but after all the walking and with the afternoon’s temperature starting to drop off a bit it grabbed our attention on the way back down.  It’s located after you leave the park and not very far from the station on your right-hand side on the way back.  We took a few minutes to sit and soak our feet in the hot spring bath and it was a super relaxing experience.

I conveniently had a couple of small hand towels in our bag so we could dry our feet before putting our shoes back on and continuing back to the city.  I usually carry a small towel in my day bag in Japan to use for our drying hands after shrine cleansing and because public bathrooms although very clean rarely have hand towels or dryers in Japan. 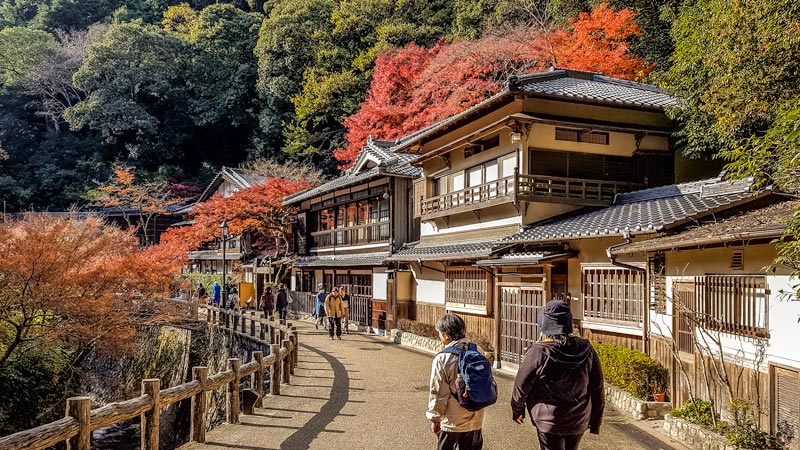 The final section of the walk to the falls closed late 2017 due to damage caused by a typhoon.  As of February 2018 a detour allows access to the falls again and the full track is expected to reopen October 2018 in time for the leaf viewing season. 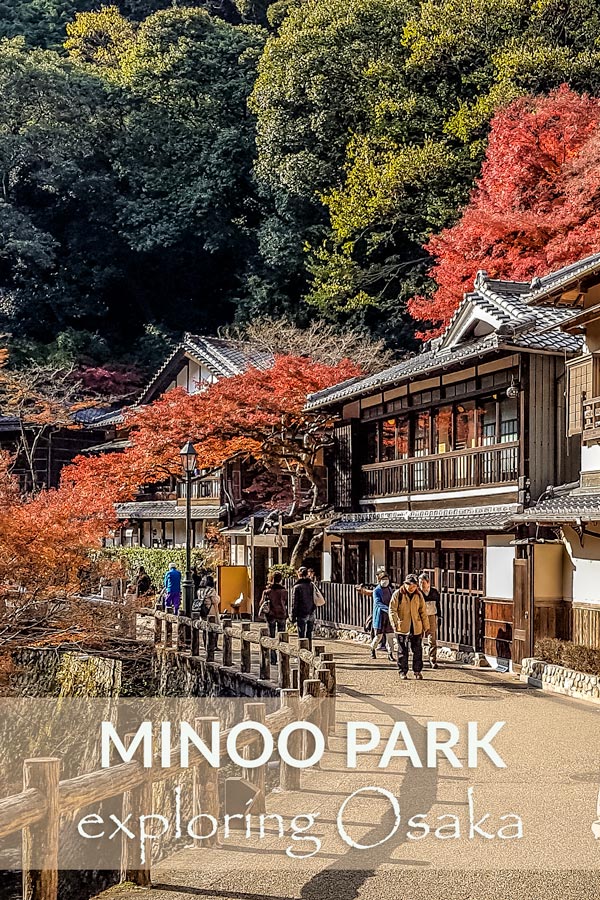 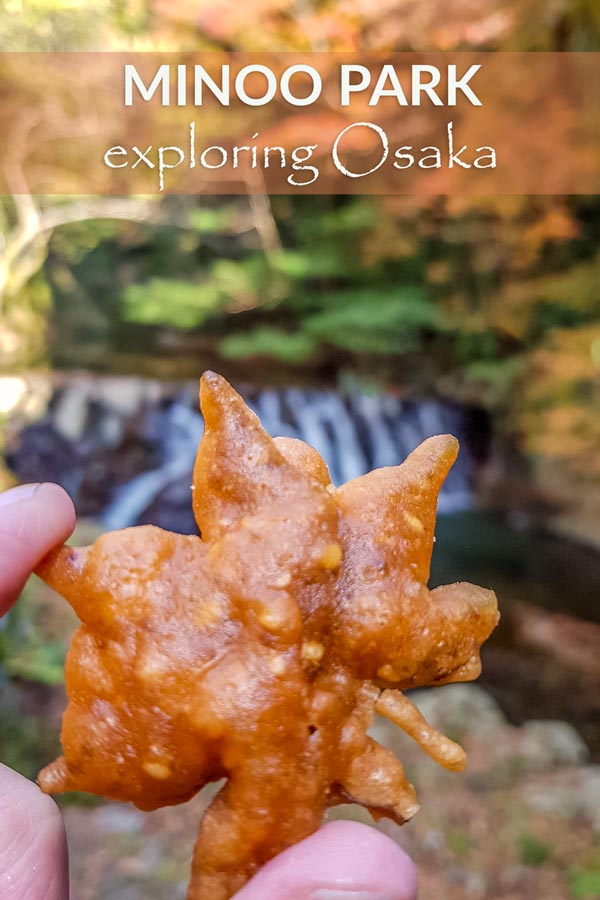