When we travel somewhere new we like to find out a bit more about the local wildlife and head out to see it in it’s natural habitat.  With no native mammals on Norfolk Island there are two main areas of interest, what lies beneath the water, more specifically the coral and fish in the lagoon, and what flies overhead.

After a sustaining breakfast at the Golden Orb (that AMAZING Norfolk Pine smoked bacon really is too good to resist), we had a quick look around the Sunday markets and met up with Margaret Christian who runs the GreenEyes Environmental Birds Tour outside the Visitors Centre in town.

Margaret drove us up to the lookout on Mount Pitt as a starting point and explained some of the natural history of the island. 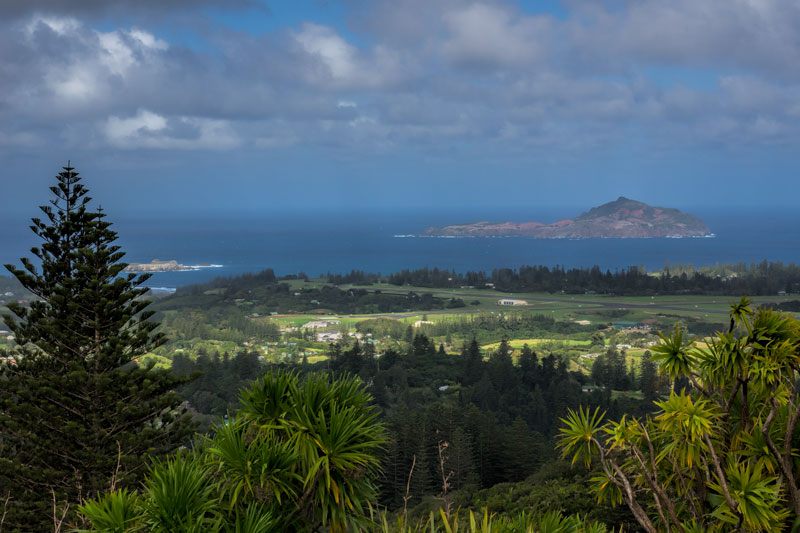 Norfolk Island is literally the tip of a huge volcanic mountain chain that runs south east towards New Zealand, the portion inhabited today with it’s rugged sheer cliffs is only around a third of the land mass that was originally exposed above the ocean following the volcanic eruption 2.5 million years ago.

The islands isolation and relatively short existence in geological terms accounts for it’s lack of any native land animals.  The earliest Polynesian inhabitants are understood to have brought the Kiore, a somewhat cute but invasive small rat with them to provide a viable ongoing food source, it’s believed to be the first mammal to arrive.

Other animals were later introduced, both vermin from ships and those brought in intentionally as domestic and farm animals.  Tight bio-security is in place still and has ensured that the island, like New Zealand, has remained free of snakes and many other unwelcome pests.

Our second stop was in the National Park.  There are a variety of walking tracks here, more than we could complete on our short stay but the Mount Bates track provided good sightings of the Norfolk Island Green Parrot, White-Eyes, Golden Whistler and the playful Grey Fantails.  Along this wide grassy track that will lead you to the highest point on the island Margaret pointed out a number of plant species and insects including a small native snail.

Being part ‘Kiwi’ we were really interested in the similarities between flora and fauna in Norfolk Island and New Zealand, its far more closely related than it is to Australia.

The Green Parrot (very similar to the New Zealand Kakariki) has come close to extinction but a breeding program has brought the numbers back to around 250 birds, still threatened but improving.  There’s a relocation program underway currently to take a small flock to nearby Phillip Island which is predator free and should give them a better chance of re-establishing.

We were lucky to see a small group of 3 green parrots a couple of times during our walk and although they stayed high in the trees they did rest in the upper branches for a while giving us a clear view.  While 3  birds in a flock is low for parrots when you consider that’s 12% of the remaining population it was a very fortunate sighting. 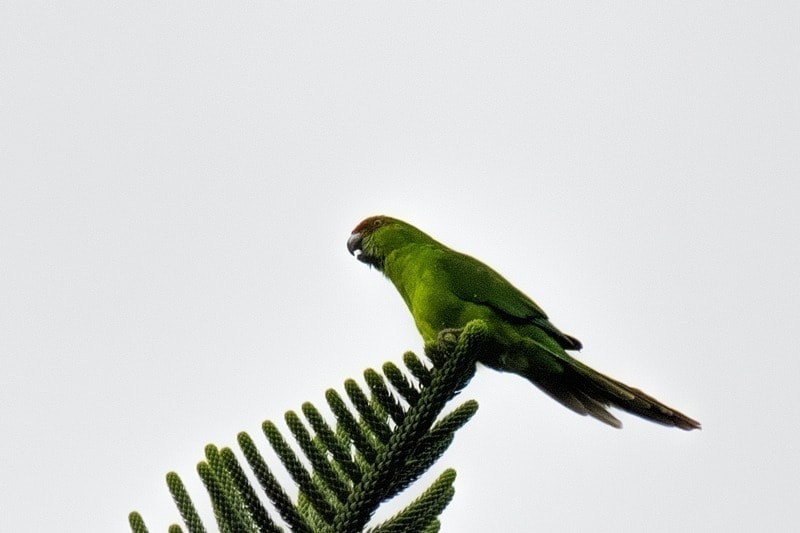 The fantails have always been one of my personal favourites, they’re a regular companion when you walk in the New Zealand bush and it’s the same here in Norfolk Island.  They’re often though to be social little birds but really it’s the insects you stir up that they really love which is why they are hardly ever still.

The endemic Golden Whistler also followed us along for a while but stayed a bit more hidden in the bush only showing itself rarely, unlike Australia’s bright golden colour of the male bird, in Norfolk Island both sexes are brown making them a lot more difficult to spot among the trees.

From the highest peak of the island we headed back down through farmland and out towards the western coast.  In the inland area we spotted a huge number of Sacred Kingfisher, Welcome Swallows, Thrush and Starlings.  Some less common spots were a very showy pair of Californian Quail and Crimson Rosella. 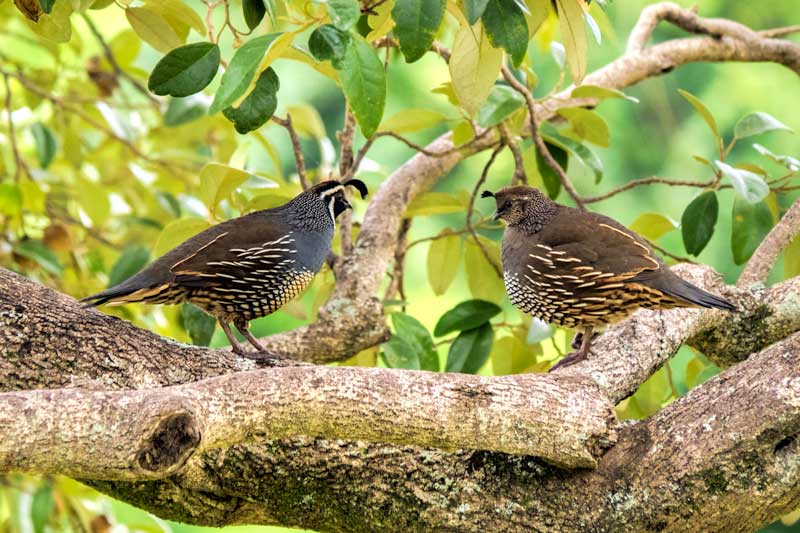 There were two birds we’d especially hoped we might spot on the island.  One was the Green Parrot and the other was the Masked Booby, when I mentioned this to Margaret as we drove, really happy to have ticked one from our list she said she’d see what she could do.

It would have been nice to see both but given our timing, we were visiting in May, I knew it was fairly unlikely.  You can imagine how surprised I was when she made a pit stop at her own coastal property and drove across the lawn and stopped in view a couple of adult birds and a juvenile roosting in the grass on the clifftop.

We hopped out to take a few photos sheltered by the vehicle to avoid startling them.  They didn’t seem too bothered by it at all allowing us a very close and extending viewing.  Unfortunately in my surprise and excitement it didn’t even occur to me to turn on the video – severe blogger fail. 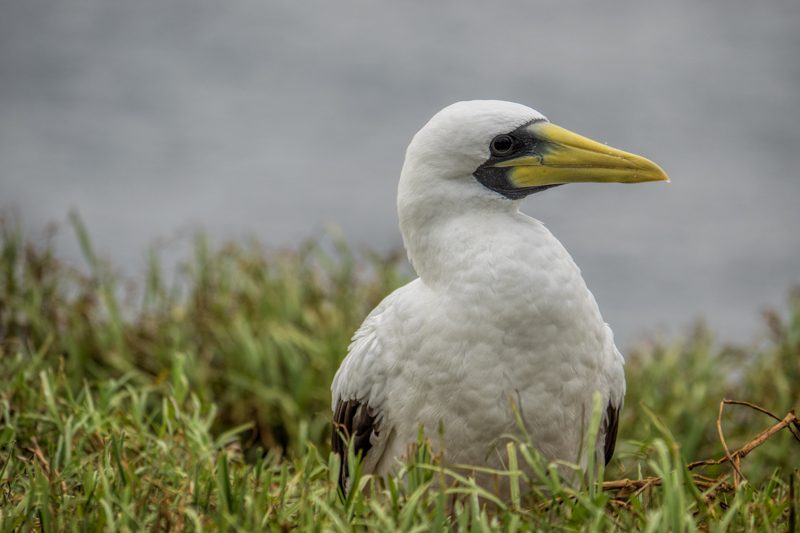 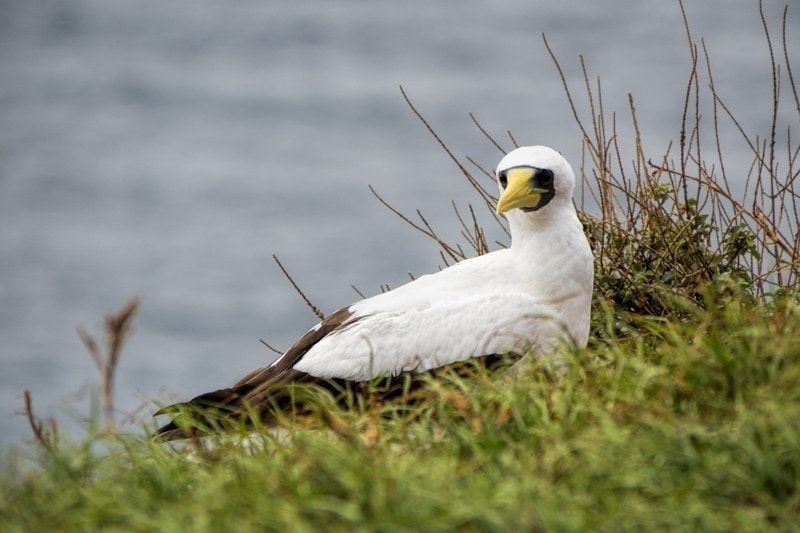 Along this part of coast both with Margaret and over the next few days we regularly saw them although not that close again.  There were also a good number of Red-tailed Tropicbirds, another first for us, Shearwaters (often called Muttonbirds in New Zealand and Australia) and Kestrel.

For dedicated birders Norfolk Island hosts bird week in November each year, Margaret runs a number of tours for that and there are also birder trips organised out to Phillip Island just off the coast.  If we make it back to Norfolk that’s something we’ll try to do.  It looks stunning out there but you need to be quite sure footed and confident as there’s a short section of cliff to climb as you get off the boat via ladder so knee problems or limited mobility would be an issue getting out there. 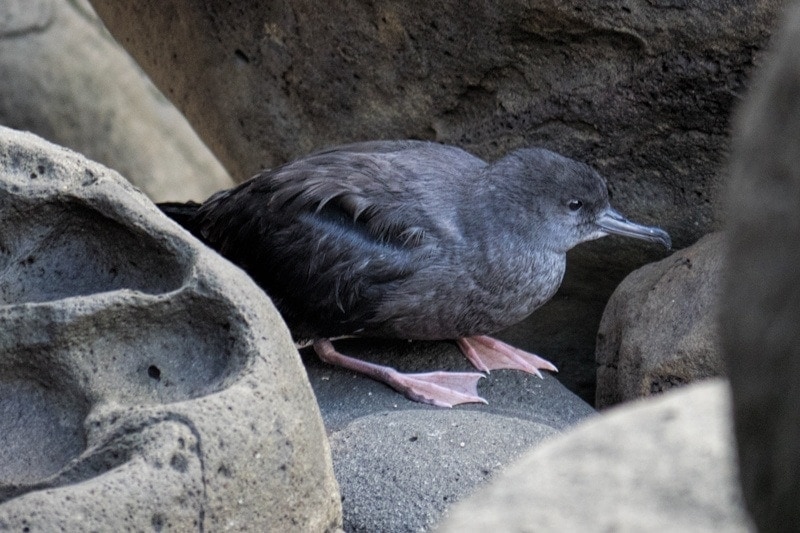 Otherwise for Margarets general weekly tours we felt they had a wide appeal to anyone with an appreciation of nature and natural history.  Certainly these shouldn’t be written off by anyone just because they’re not a dedicated birder.  She is extremely knowledable and a wonderful companion for the morning.  We caught up with Margaret on a non-tour day but the full tour is four hours and includes transport, morning tea at her home and a copy of the bird book she wrote about Norfolk Island.  Where you go on the day will be tailored to the interests of the group, time of year and around current sightings.

To book in on the tour just stop in at the Visitors Centre.  We found that it’s easy to book most Norfolk Island tours when you arrive on the island, it’s not necessary to book any further ahead.

Disclosure: Our thanks to Norfolk Island tourism for hosting our stay and organising our time with Margaret.