There’s a vibe when you arrive at Yamba on the northern New South Wales coast.  Your breathing slows, your shoulders relax, it feels good to be at the beach.

We watch as a fur seal makes a leisurely entrance from the rocks into the water, it swims out towards the surfers then starts doing summersaults in the waves.  It’s clear that childlike feeling of freedom and peace is all encompassing.  We chat to a family on the shore as we watch it, they moved from Brisbane to Yamba a few years back for the quality of life and have never looked back.  I can see immediately we are not going to be in a hurry to leave this friendly and laid back surf town either.

Yamba and nearby Angourie are a 9-hour drive north of Sydney and 3 hours south of Brisbane meaning they enjoy a mild climate fairly similar to the Gold Coast in Queensland.  They’ve been a haven for surfers since they were ‘discovered’ in the 1960’s and a National Surfing Reserve was established here in 2007.  I’m told it has one of the best right hand point breaks around, not that I can attest to that but it doesn’t matter because you don’t have to be an accomplished surfer to love what the region has on offer.

We recently spent three days here at the Angourie Rainforest Resort and in hindsight we should have stayed longer.  I’m quite sure we’ll be heading back to Yamba very soon.  If you are planning a visit and wonder what there is to see and do in the area here are some of our tips for visitors.

To be fair Australia has a lot of coastline and much of it is celebrated for it’s surf.  That said the Yamba region is right up there and holds a special sentimental place in the heart of many surfers of all generations.

The break at Turners Beach is protected from wind by the point on one side and the breakwall on the others.  This is a relatively safe surf break despite having some good waves making it a suitable practice ground for younger surfers.  It’s also a favourite with the local dolphin population and what could beat racing a dophin in on a wave.

Angourie is of course the most iconic of the surf beaches in the area and the first in NSW to be designated as a national surf reserve.  It was recognised as a prime local surf spot in the early 1960’s and became internationally recognised in 1964 when many of the big name surfers of the time made a trip up from Sydney after the World Titles in Manly.

Between the two are several other beaches and breaks suited to various expience levels but Spooky Point and the aptly named Life & Death near the rocks at Angourie are best left to the experts. 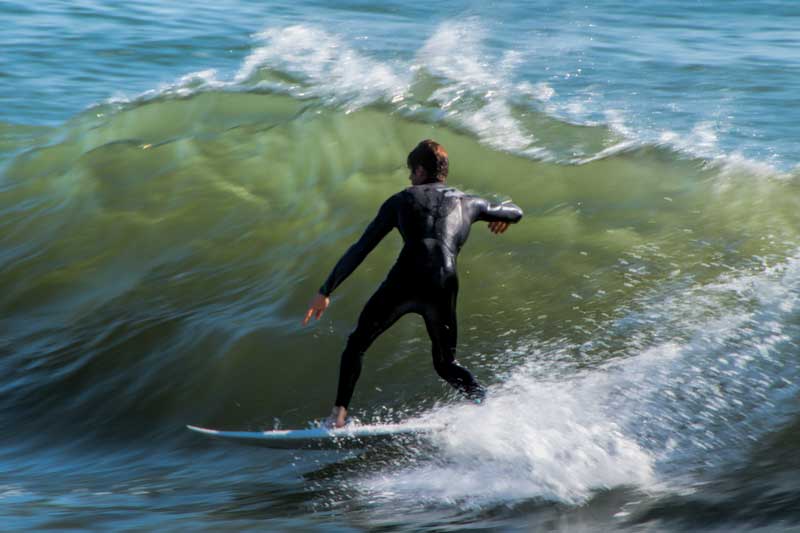 I’d expected the national park to offer some interesting wildlife options but we were lucky to get much more than we expected.  We saw dolphins every day, there are glimpses of whales from the headlands on their annual migration and kangaroos, wallabys and emu on the coastal track.  As I mentioned above we saw a seal at Yamba Point, and there are healthy rock pool environments brimming with life all the way along.  Even the small rainforest walk in the resort where we were staying has diverse bird life and a resident bandicoot digging holes in the path each evening.

At the mouth of the Clarence river is Hickey Island, protected by the break wall there is safe swimming here for the family at Whiting beach and it’s a popular spot for dolphins in early evening too.  Interestingly records from Matthew Flinders ship records in 1799 when he stopped in the bay to take on fresh water indicate that Hickey Island didn’t exist at that point, it has been created in the last couple of hundred years from the movement of sand in the wind and tides.

Take the easy 1.5 km stroll out through the bush and back along the beach but be aware there is little shelter along the way so you’ll want a sunhat and some sunscreen. 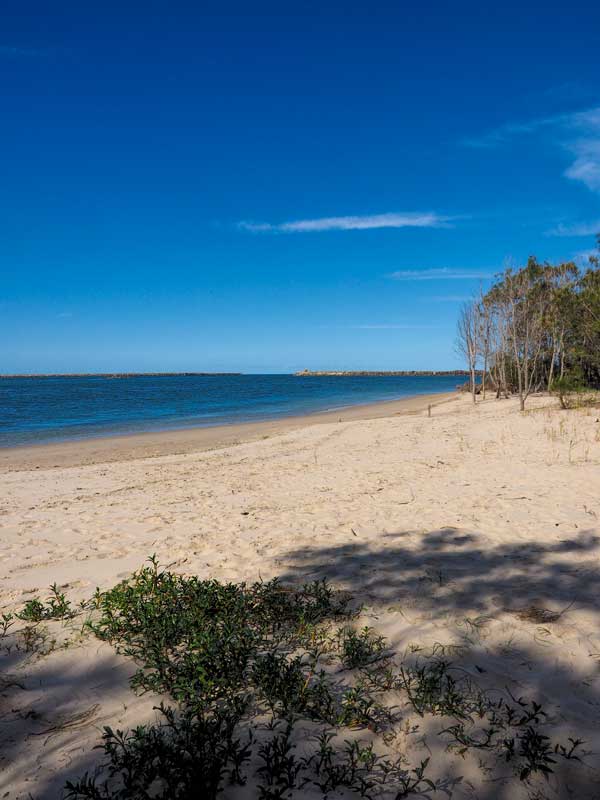 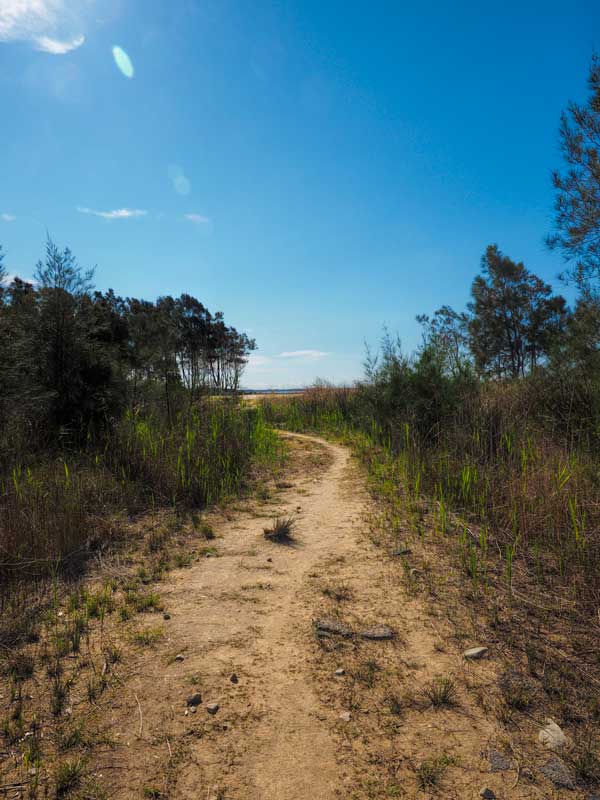 At the mouth of the Clarence River between Whiting Beach on Hickey Island and Turners Beach are the break walls designed to protect the mouth of the Clarence River.  They were built between 1950 and 1971  to prevent sand buildup and large waves that posed a threat to commercial fishing boats and recreational boatie using the channel.  In addition to their primary purpose it also provides an extremely popular evening walkway and spot to watch the sun go down.

Between September  and the end of 2016 parts of the wall will be closed to the public for a period while it undergoes some necessary repair work.  Some 50,000 tonnes of rocks have been prepared for the project but it’s planned that the walkway will be even better when it re-opens. 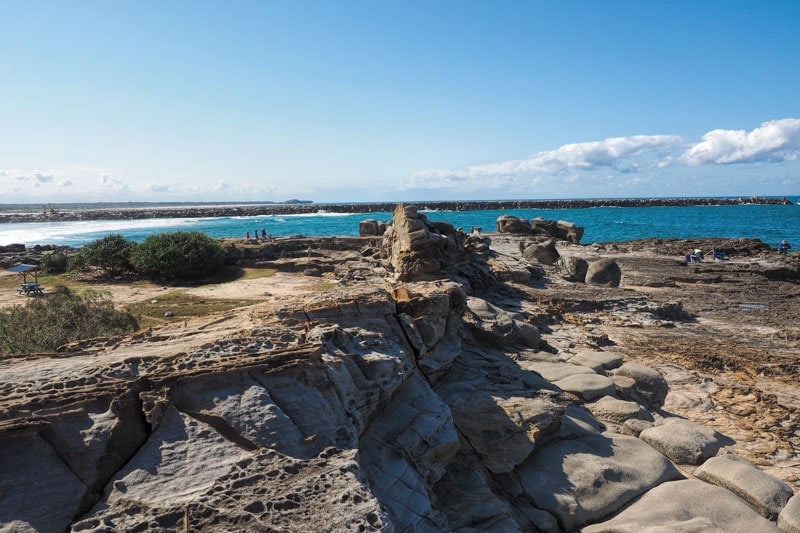 Find a deserted spot in the miles of silky white sand

The coastline offers an interesting combination of rock shelves and soft white sand beaches.  There is pretty much something for everything here, Whiting beach at the mouth of the Clarence River is a flat water beach suitable for families with smaller children to swim.  Yamba 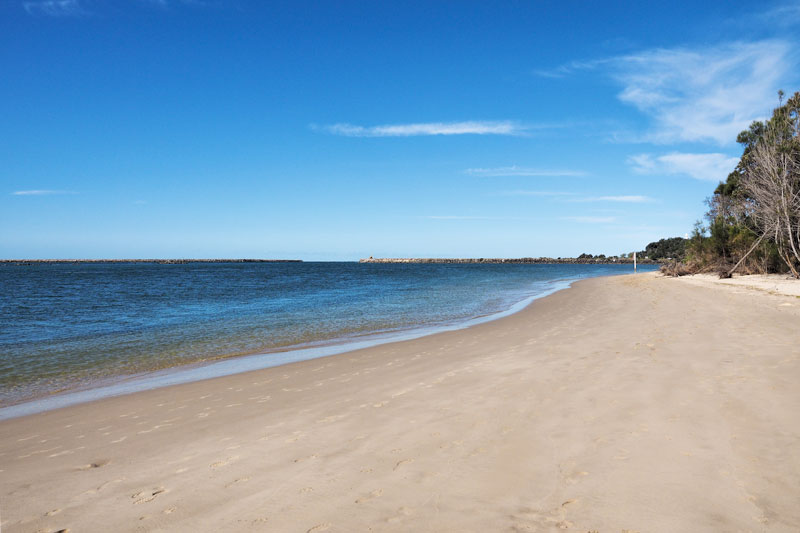 The main beach at Yamba is Turners Beach.  Sheltered on one side by the point and the other by the breakwater wall you will usually find a spot out of the breeze here to soak up the sun.  It’s a popular spot with both swimmers and surfers, and during the summer there are lifeguards on duty.  There are both picnic and toilet / changing facilities available.

It’s an easy walk from town and the camping ground, or there is a good quantity of carparking available. 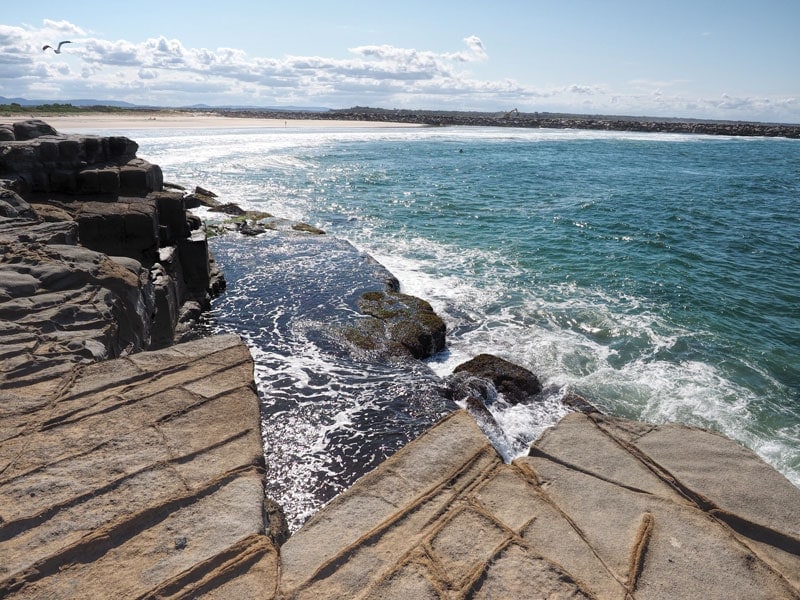 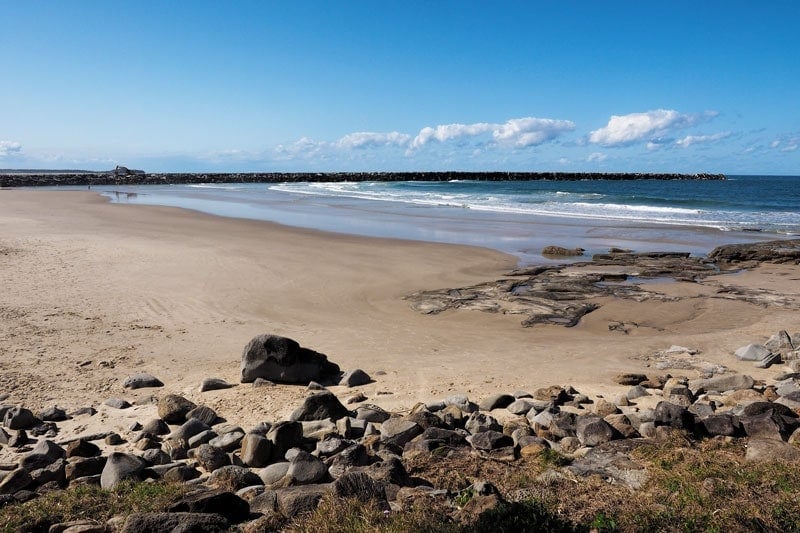 Climb the rock cliff at Yamba Point to the lighthouse

Behind Turners Beach and beneath the lighthouse is Yamba Piont, a popular picnic spot.  We bought our fish and chips around to here for lunch one day and watched dolphins playing in the surf along side the human surfers.  On another day we saw a seal sunning itself on the rocks and also swim out in the surf for a while.  There are some great rock shelves around the area for rock hopping, fishing and exploring the rock pools but if you continue around the top there’s a well worn path up the cliff side to South Head Park.

Pilot Hill is a large grassed area with fabulous views out over the water and the location of Yamba lighthouse.  There’s been a permanent lighthouse on this site since 1880 but the current structure dates to 1955.

On the way down we found the Yamba Rotary Walking track which leads down formed stairs back to the Yamba Point carpark so if you are a little uncertain on the rock scramble you can still get to the top on foot. 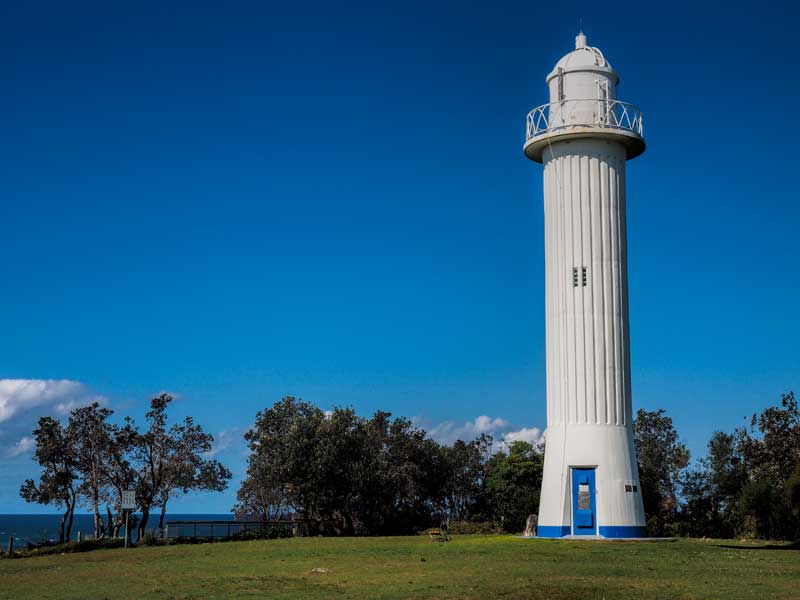 On the road to and from Angourie take the turn off to Green Point.  High on the cliff here is a great place for spotting whales as they pass on their annual migration.

You can clamber around to the bays on either side, explore the rock pools or just enjoy the peace and quiet.  We were the only ones her on this gorgous sunny day. 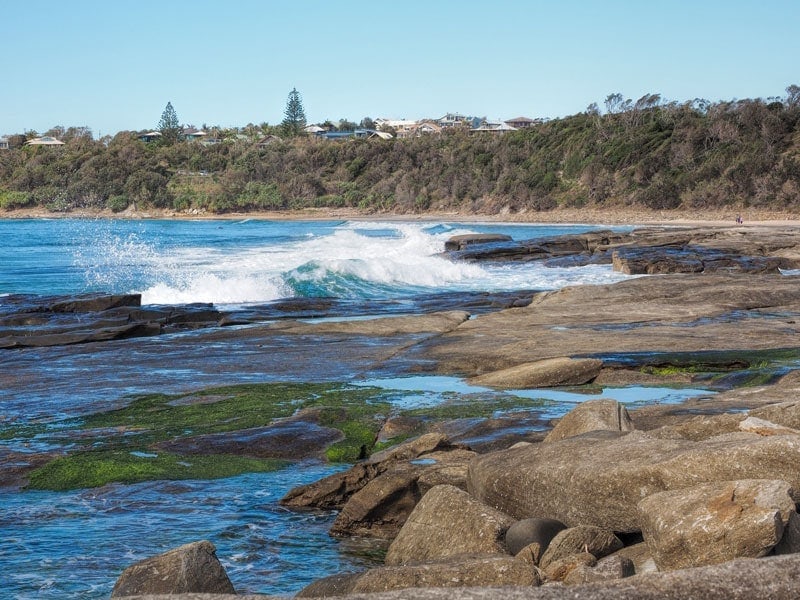 The green and blue pools

These two pools were formed in 1899 and have become a popular picnic spot and swimming hole.  The area was a bluestone mine from 1890 to 1899 with the rock being used to create a training wall at the mouth of the Clarence river.  The rock was transported by steam train along the track which has since been convertred into the Angourie to Yamba road you drive up to the beach.  One night in 1899 the workers unknowingly hit an underground spring, when they returned in the morning they found the pit full of water with their equipment deep beneath.

The pools are super deep making it safe (relatively) for cliff diving into the water below.  I wasn’t game to give it a go, not least because it was still way too cool for me to brave swimmers in NSW in September but yikes that’s a scary climb up the cliff.

Famed for it’s surf break but this long ruggedly beautiful beach has many other attractions.  Unbelievably we saw only 2 other people in the entire length of the beach and both were near the point.  On the south side of the creek we were the only footprints in the sand and had it entirely to ourselves.

Miles of beautiful soft white sand, occassional shade from trees along the dunes and sparkling ocean, it really does have everything I want in a beach. 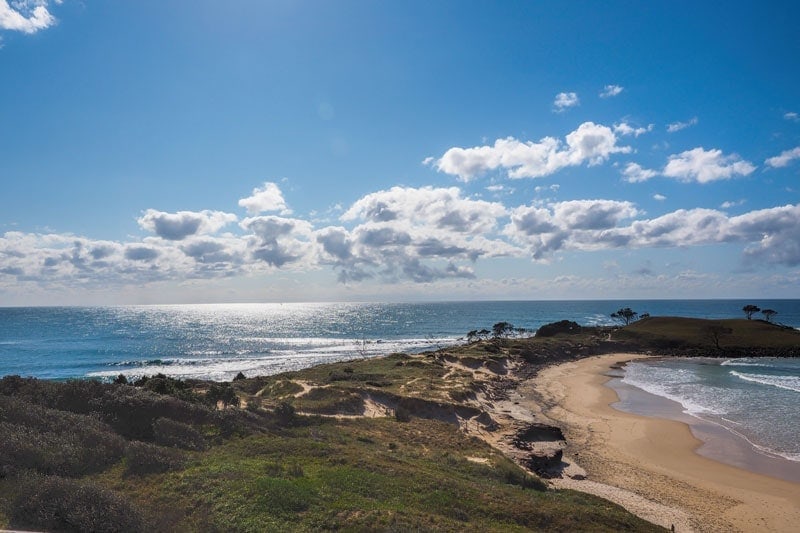 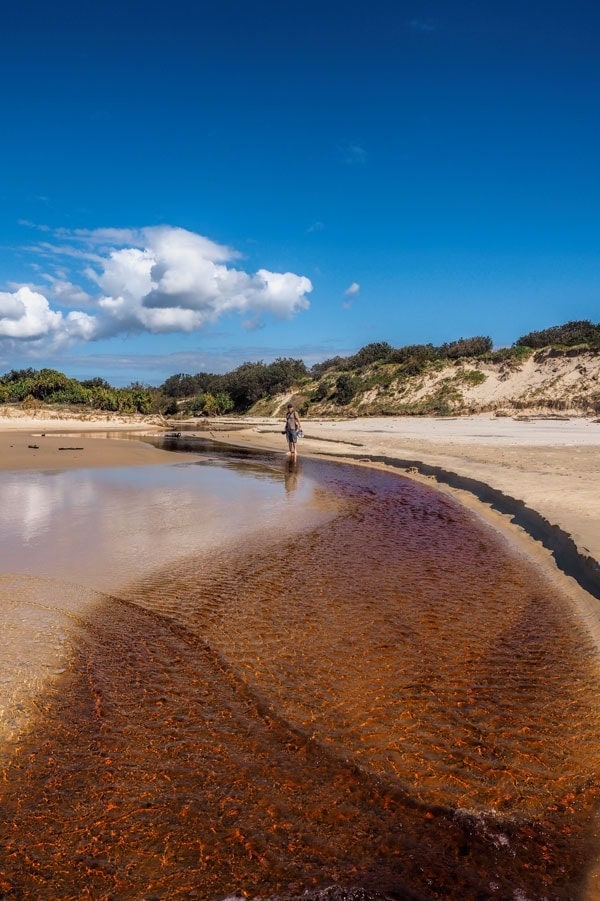 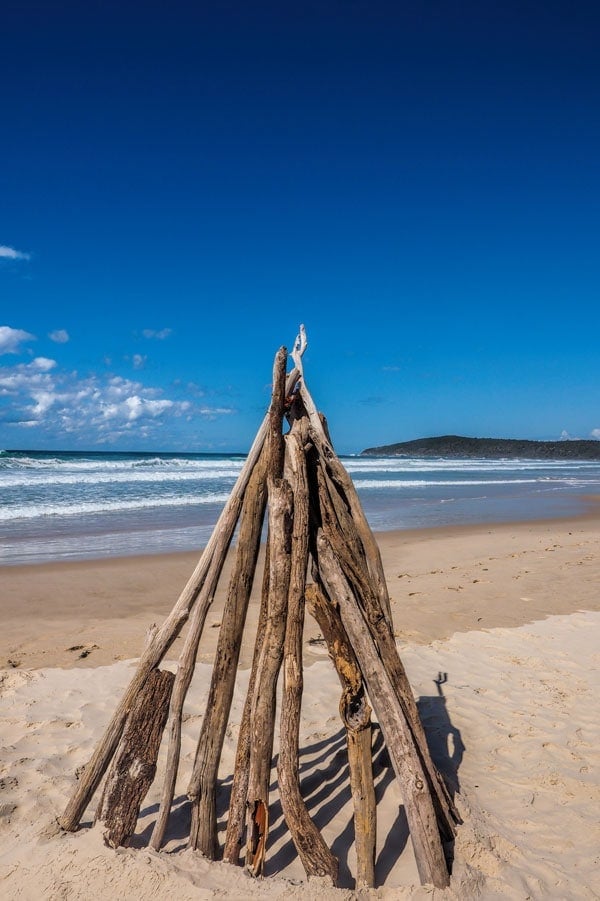 This has to be one of the biggest attractions in the area for those that love the outdoors.  Stretching along 65km of coastline from Angourie in the north to Red Rock in the south this area is stunningly beautiful.  This multi day hike has several camping tracks along the way, the first from the Angourie end is at Shelley Beach about 5km in and has no vehicle access.  Other camping spots on the track can be accessed by car and are even suited to caravan access.

As a day walk Shelley Beach is also a popular destination at 10km return but in reality any portion of this track is stunning so pick a distance to suit your fitness and available time.  A walk out along the coastal trail and returing along the length of Angourie beach crossing the tannin stained Mara Creek is a must. 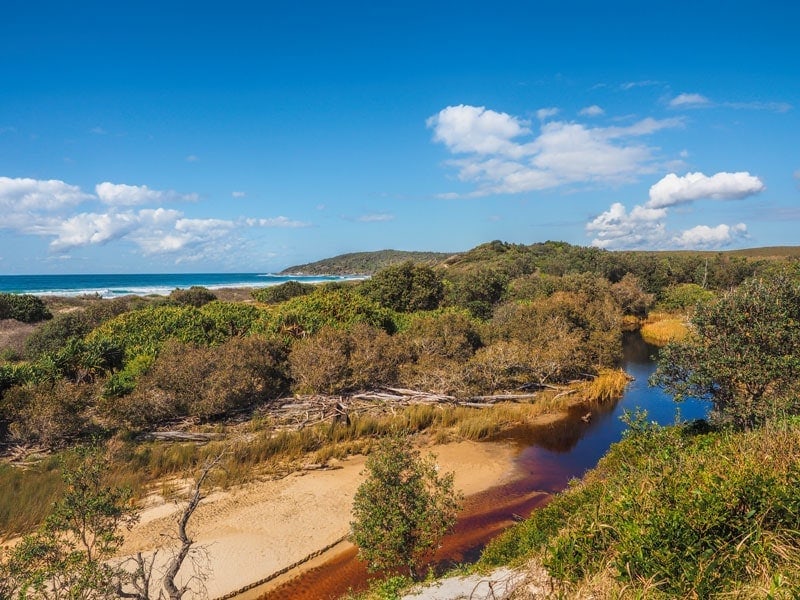 Stop and watch the sun rise and set

Watching the sun come up or settle over the horizon at the end of the day is one of the most relaxing things to do.  I love to watch nature paint the sky in a constantly changing palette and pattern.  We headed down to the break wall and river mouth each evening for our pre-dinner entertainment and were treated not only to the beautiful colours and patterns in the sky but pods of dolphins frolicking in the bay every night.  Very special! 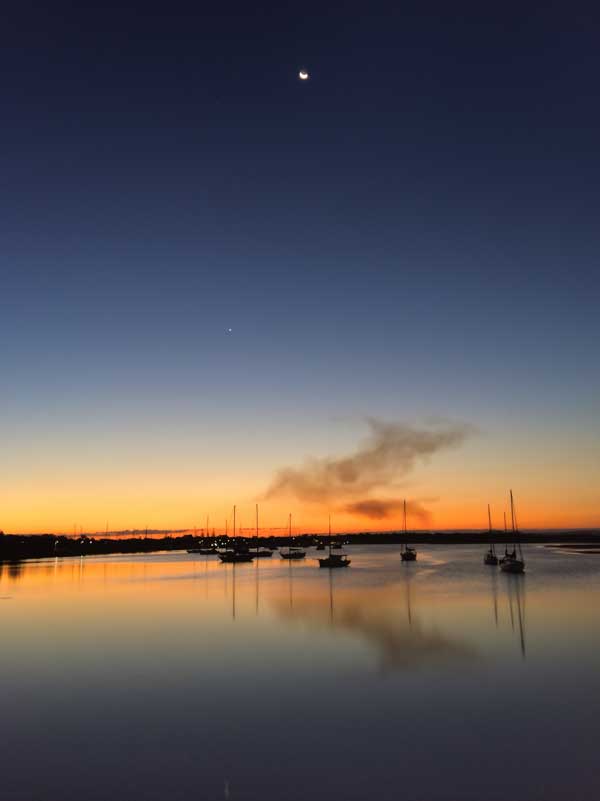 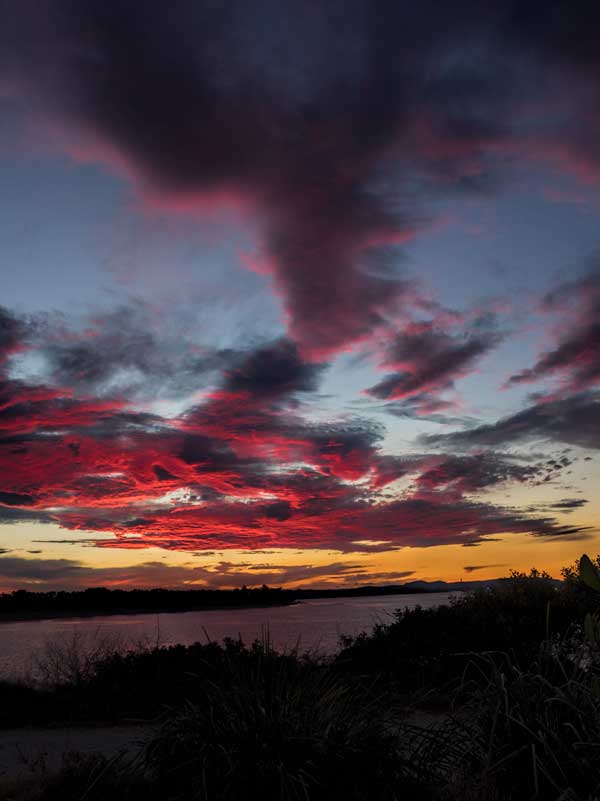 So there you have it, so many great reasons to visit Yamba or to extend your stay for a few extra days.  We only had 3 nights on this trip and could easily have spent twice that, I’m pretty sure we’ll be heaing back as soon as we get the chance to see more of the surrounding Clarence Valley.  Happy travelling!

If you’ve been to Yamba and have any top tips to add please share them in the comments below or add your own favourite spots in northern New South Wales. 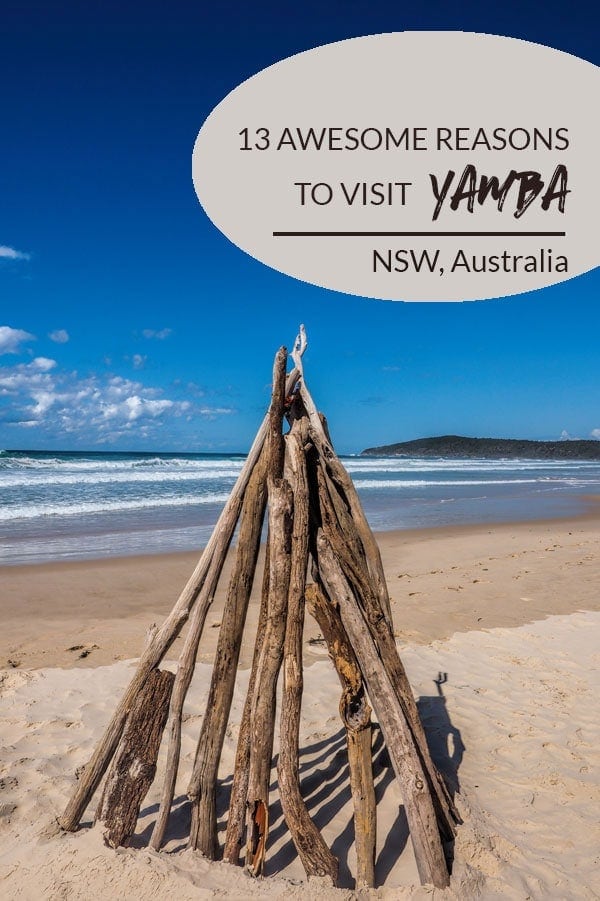 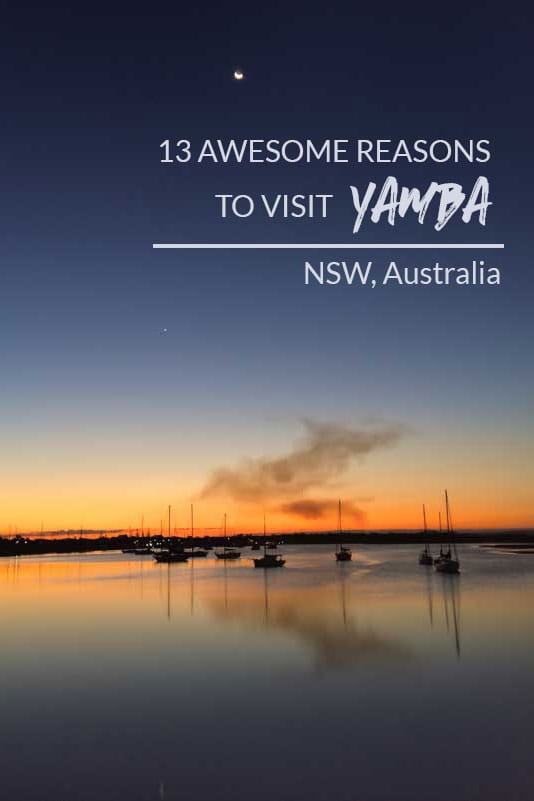