This post may contain compensated links. For further information please read our disclosure.
Enryakuji is an easy day trip from Kyoto, just half an hour on the train and you can be breathing the mountain air with stunning views out over Lake Biwa. This peaceful collection of historic temples on Mt Hiei is the perfect spot for a bit of light hiking, a living history lesson and a whole lot of serenity.

I love spending time in Kyoto but in the midst of cherry blossom mania I wanted to enjoy some fresh air and the serenity of a temple visit without the flag carrying tour leaders and their coach loads of chattering followers.  It was one of those days that led us to venture into the hills east of Kyoto to Mt Hiei (Shiga Prefecture) and explore Enryakuji.  This peaceful mountain complex would be a great alternative for any visitor who doesn’t have the time or resources to travel out to Koyasan in Wakayama prefecture.

Enryakuji is the name given to both the group of Buddhist temples and the general area on Mt Hiei.  it was made a world heritage site in 1994 but was surprisingly quiet on the day we visited and turned out to be a great day for some light hiking, mountain air and exploring somewhere slightly off the main tourist route.

We took the train from Kyoto station to Sakamoto, it’s an easy trip on Japans efficient train network with good views of Lake Biwa along the way.  It takes around 30 minutes and cost Y460 each way.  There were a few English brochures with a map at the Sakamoto station but it wasn’t difficult to find our way.  We headed up the main street opposite the station, towards the mountain and away from the lake.  The large concrete Torii over the road let us know we were on the right path as we continued up the road.  We stopped briefly at a convenience store to get some snacks and drinks for lunch having been warned that there would be little choice once up the mountain.

Further up the road we came to another Torii marking the entrance to the shrine, you take a left at the road immediately before it to get to the Sakamoto cable car station.

The cable car costs Y1570 for a round ticked to the third station (Enryakuji).  It’s a modern and comfortable trip up the mountain.

At the top the views from just outside the station are stunning.  You can walk right around the lookout area for an incredible view in all directions.

After you’ve had a good look around head up the road toward the temple complex past absolutely huge cedar trees.  Enryakuji is arguable one of the most important monasteries in Japan and is the headquarters of the Tendai sect of Japanese Buddhism.  Many influential monks studied at Enryukuji including the founders of a number of later sects including the Pure Land (Jodo), Zen and Nichiren sects.

Enryakuji was founded in 788 by Saicho (posthumously known as Dengyu Daishi), the monk credited with introducing Tendai Buddhism to Japan.  At its peak Enryakuji had as many as 3000 sub-temples and a powerful army of warrior monks who often engaged in power struggles with other monastaries and political leaders.  Ultimately this worked against it as Oda Nobunaga in his quest to unite the country attacked and destroyed most of Enryakujis buildings and killed many of the inhabitants in 1571.  Because of this rampage most of the buildings in the complex today date from the early Edo period when it was rebuilt. 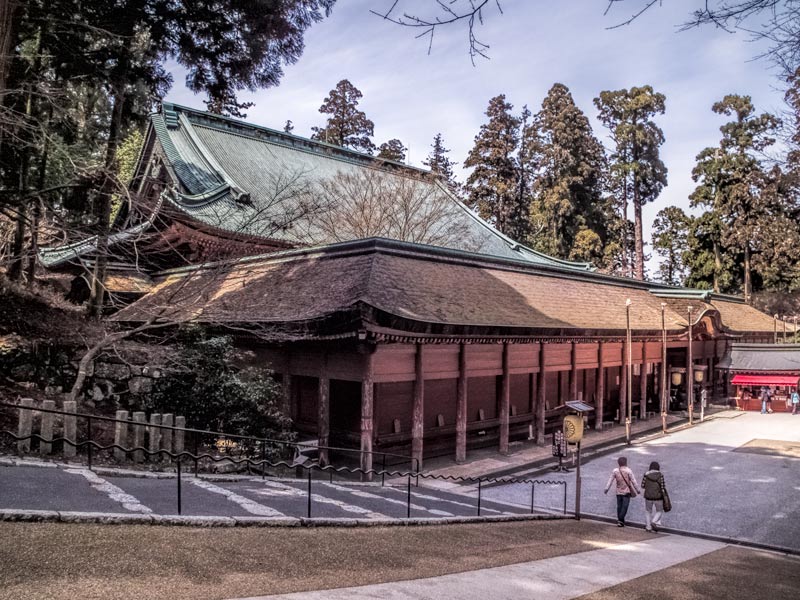 Konpon Chu-do is the most important temple in the complex and in the first group you come to from the cable car station.  It was established in 788 by Dengyu Daishi.  The hidden icon of the temple was carved by Daishi and is of Bhaisajyarguru (the Medicine Buddha) protecting the historical Buddha.  The statue is said to have been kept continuously lit by Fumetsu no hoto (the unextinguishable dharma lamp) for over 1200 years.  This original temple was destroyed in the fighting of 1571 so the current building dates back to 1642.

Kaidan-in is where aspiring priests of the Tendai sect are ordained.  Following the death of Dengyu Daishi an imperial permit to establish the temple was issued and it was established in 828.  The building is very ornate and while you aren’t permitted to enter you are able to see the enshrined statues through the small windows in the ornate doors if you give your eyes a few moments to adjust to the light.

The training hall at Hokke So Ji-in was planned by Daishi and founded in 862.  Nobunaga later burned it down and the current building was restored 400 years later in 1987.  The Amida-do was established in 1937.  There was a small service taking place while we were there and the soft chanting could be heard in the courtyard while we ate lunch.

By this stage I was already pleased I’d worn comfortable shoes.  While it was easy walking it had a lot of steps, steps and more steps up and down the maintain in between the temple areas.   Some of the stairs went for a considerable distance and were knee height on me making for very stretched calves by the end of the day.

In the Sai-to area there are several more temples to see.  Two of these temples  are joined to each other, these are called Hokke-do and and Jogyo-do but jointly they are known as Ninai-do.  This joining of the two temples symbolizes the unity of the teaching carried out within them.

The whole mountain area is very pretty.  It has well developed walking paths and stairs but is also very peaceful with huge old trees adding to the feeling of serenity and quiet.  The history of the area, even from what we were able to understand without being able to read Japanese is incredibly interesting and it wasn’t busy, actually there were very few people around.  This was a great day out and an easy self paced tour.  The Enryukuji area reminded me a lot of Nikko both for it’s well preserved historic significance and the stunning natural beauty.  The main difference was how quiet it was here, there were large sections where you had the area to yourself to explore.  The largely Japanese tourists that were in the area were friendly when you passed along the way and you could really feel the energy of the place rejuvenate you.

Entry fees and other cost

There are no fees for entry to the temple complex itself but a couple of individual temple buildings did require a donation to enter the building.

You can access the Enryakuji section of Mt Hiei by car or an organised tour.  Alternatively the cable car which we thoroughly recommend costs Y1570 return from the bottom to the third station and back again.  From the lower station it’s an easy walk to the train station.

Shops, restaurants and other facilities

We came across no shops in this part of Mt Hiei and the only restaurant was part of the hotel on the mountain run by Hoshino Resorts.  We recommend coming prepared with drinks and snacks.

There are public toilets around the mountain and we did find a drink vending machine.  There is English language signage around the major temple buildings but it might be worth saving this official Hieizan information brochure to your phone or printing it out. 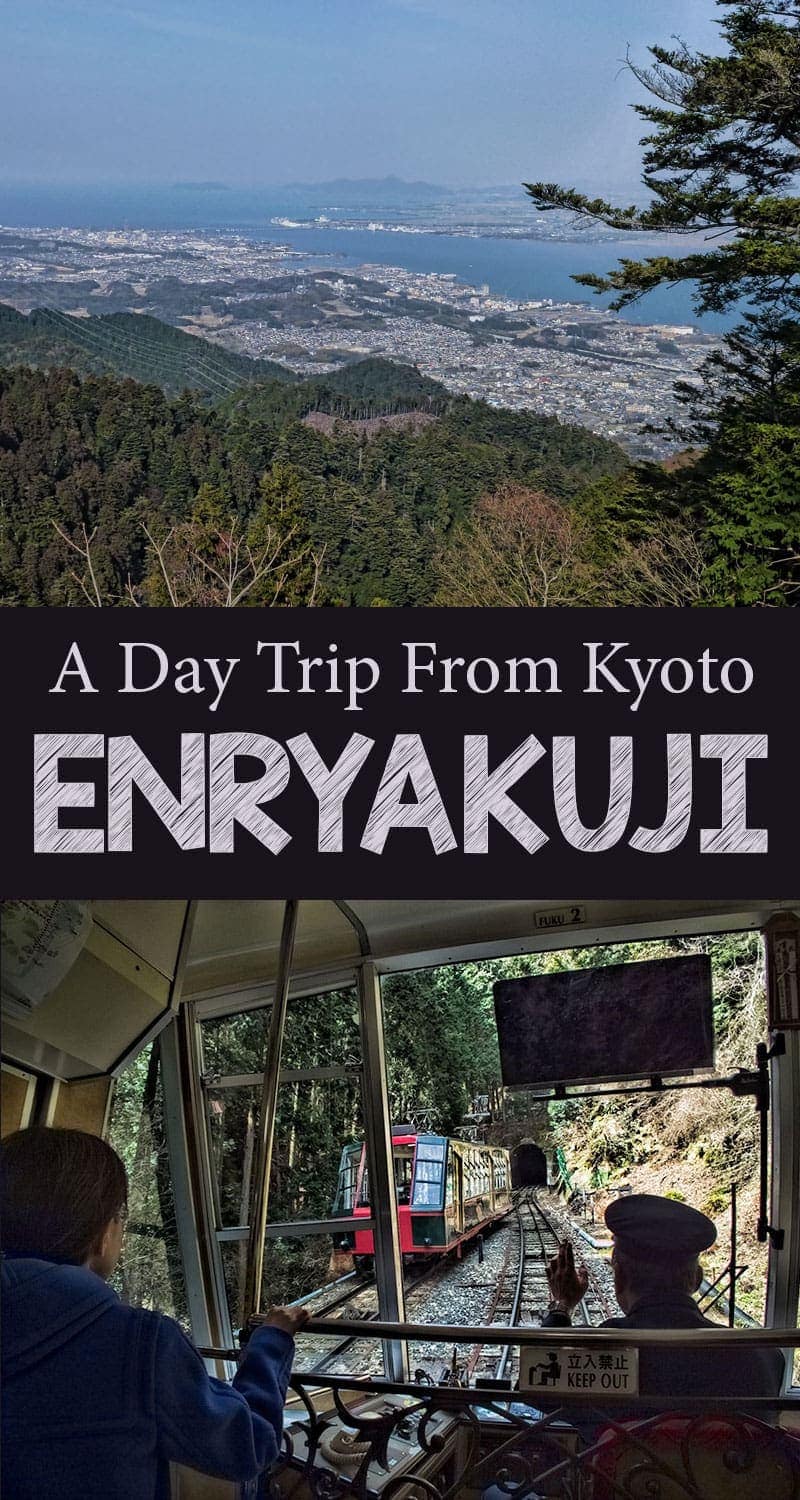