The Witches Falls and Witches Chase Tracks are entered from the picnic area on the Main Western Road on Mount Tamborine.   Witches falls (3.1 km) is a circuit track returning to the car park and picnic area, the Witches Chase track (2.7 km return) is an extension on from the falls lookout and exits at Witches Chase so is usually walked back along the same path rather than returning along the road.

The walks are classified as moderate difficulty.  The paths are safe and well formed unless there has been heavy rain but they are step in parts as you climb down the mountain to the valley floor and back up again to the top of the falls, then back up to the carpark area.

The Witches Falls National Park was the first National Park in Queensland, it was established in 1908 and is believed to the the third oldest in the world after Yellowstone in the USA and the Sydney Royal National Park.   It is an easily accessed area of the Gold Coast hinterland about an hour from either Brisbane or the Gold Coast with good roads in and out.  It’s conveniences makes it particularly popular with locals on weekends.

The park area has excellent facilities including car parking, a picnic area with a number of tables and BBQ’s plus clean (organic) toilets.  The tracks are well formed and cleared of any fallen debris regularly.  You will walk it easily if you have reasonable mobility but it does include uneven ground and steps, children manage the track well but should be supervised as some areas do have a steep drop off to the side.  Also we have found that while waterfalls are more spectacular after heavy rain the area is prone to some rock fall and the mud can be slippery so take care after extended wet periods.  Even though it’s a great spot for a picnic there are also dozens of interesting places to eat, drink and shop a few minutes drive away in Witches Chase or the Gallery Walk areas if that has more appeal.

We tend to walk the track clockwise spending time down on the valley floor earlier in the day, I don’t personally think there’s much difference in difficulty as you have to walk down and back up either way but I think the general view is that anti-clockwise around the loop is easier going down the steps and up the more sloped track coming back.

The whole area is great for wildlife, we’ve been lucky enough to almost always spot the rare and timid Albert’s Lyrebird but there is much more to see in the park which is full of bird life, possums,lizards and the odd snake.  The area near the seasonal lagoon is good for bird spotting but so is most of the track if you listen and stand still occasionally as you walk through.  Our latest walk we also spotted the green catbird, golden whistler, black cockatoo, silvereyes, eastern spinebill, pale yellow robin, grey and rufous fantails amongst other more common birds.

If you’re planning to head up Tamborine Mountain to do a few of the walks like Witches Falls it’s worth remembering a jacket.  Although it’s not a tall mountain the air temperature is often 5-6 degrees cooler than the coast and more likely to experience a bit of unexpected rainfall, it is a rainforest after all.  The moisture while great for the plants  can also be attractive to the biting insects so insect repellant and a hat are also a worth packing in the car.

How to get there

Head into the Gold Coast Hinterland following signage for North Tamborine.  The main road through here changes names many times but you’ll find the carpark for Witches Falls just past the intersection of Hartley Road with Main Western Road if you’re coming in from the north. 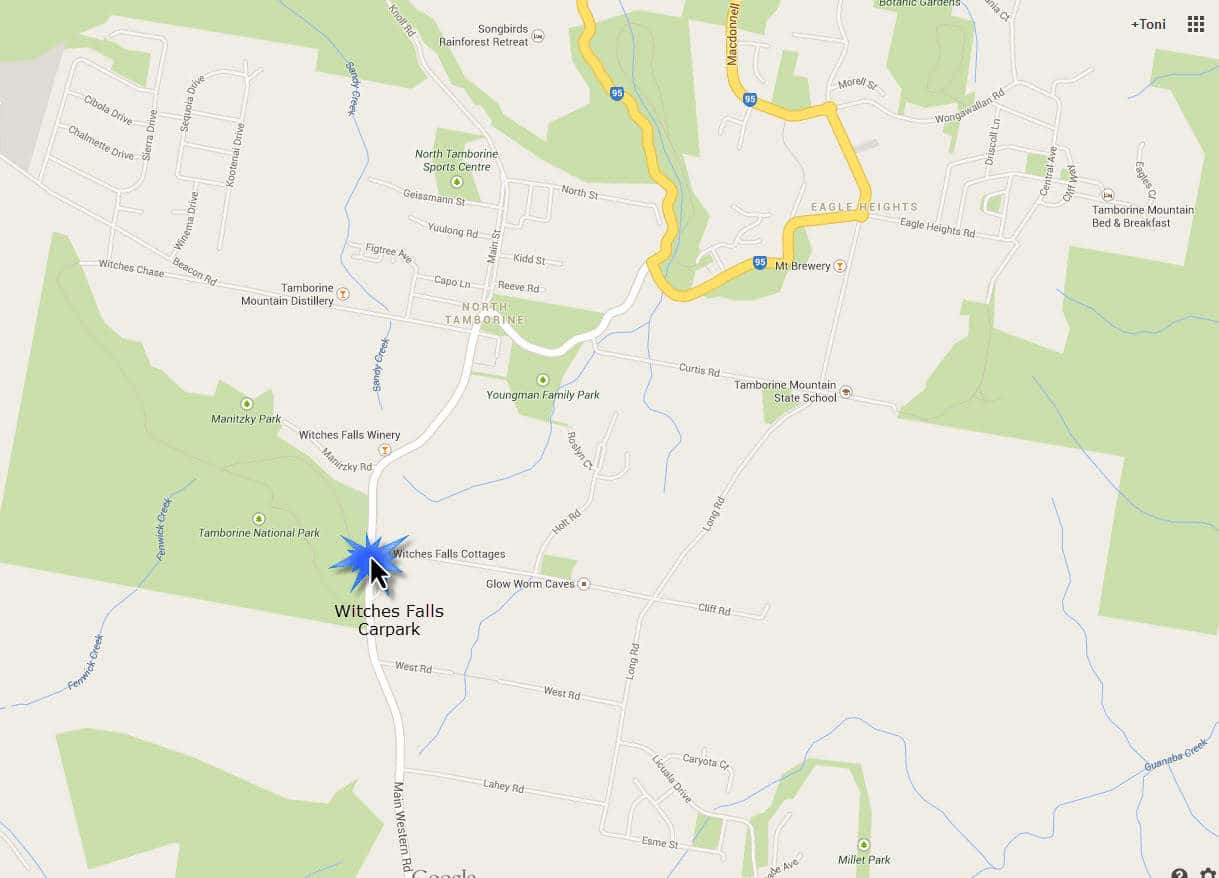