This post may contain compensated links. For further information please read our disclosure.
In a city of over 1600 temples, you are going to need to quickly narrow down your choice. The most visually stunning, the most interesting history, the most spectacular garden in all seasons. These 15 represent some of the best temples in Kyoto for visitors - which will be top of your list?

With over 1600 Buddhist temples in Kyoto we barely scratched the surface even with multiple visits to the city over several years.  Of course not all are famous, or even open to the public on a regular basis.  Some you would need to attend during a special opening which usually coincides either with a holiday or seasonal events like the sakura blossom, camellia flowers or koyo coloured leaves.

There are some temples in the city though that are so beautiful and so quintessentially Kyoto that they have wide appeal and at least a few of them are likely to make it onto the itinerary of most visitors.  These are 15 of my favourite Kyoto temples including a couple of less familiar ones that are worth considering.

In Japan temples generally refer to Buddhist temples, whereas Shrines are the sacred spaces of the uniquely Japanese Shinto religion.  In this articles I’m considering only the Buddhist temples, there are also many beautiful shrines but the two can’t really be compared so they deserve their own article.

Many temples are important historic and cultural spaces that are extremely expensive to maintain, for this reason most of the ones tourists are likely to visit will charge a small fee.  The fees vary but are usually between Y200 – Y700 so roughly $3-$8 depending on the exchange rate.  Not all temples charge a fee, some have free entry or only charge a fee for specific sections with the rest free to walk around.

Rather than ranking them in order, lets be honest I tried and failed on that, I’ve sorted them broadly by regions.  I hope this might make it easier to combine a few together or with other activities in that part of the city.  I’ll give a brief description of why they are on my favourites list, perhaps a few will resonate with you and make it to your itinerary too.  The links in the article are to related articles that cover that temple and can provide additional detail for planning your visit.

The golden pavillion of Kinkaku-ji viewed across the  lake is perhaps one of the most famous views in Kyoto.  Clad in gold leaf it’s especially striking but can be a little crowded so pick your timing. 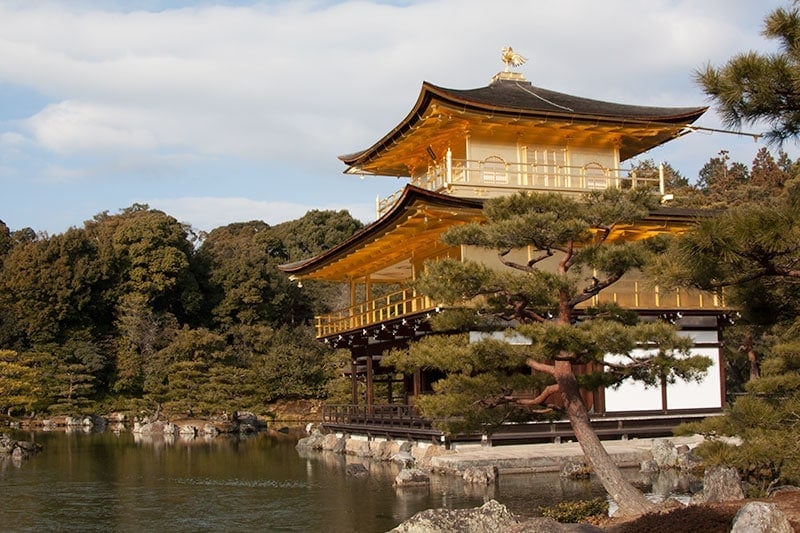 I love the gardens of this temple in addition to the very famous zen stone garden.  If you describe it as 15 rocks in a sea of gravel it really doesn’t do it justice, you need to sit a while to appreciate the tranquility of this spot.  We visited right on opening time so we experienced it at it’s most quiet.  I think this one is best enjoyed without the bus loads that come later. 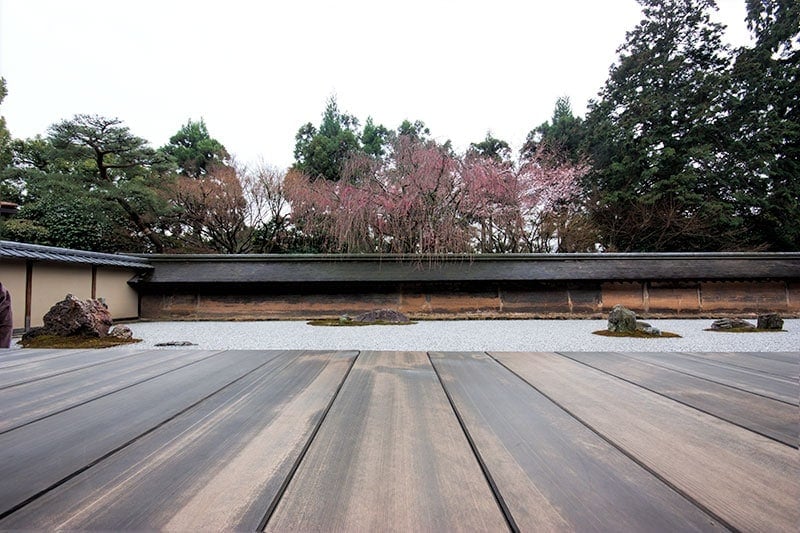 This is a huge temple complex made up of a several large main buildings and around 50 sub temples.  Most of the temple buildings can’t be entered but you can wander freely through the complex.  The building pictured here is the Butsuden Hall, an important cultural asset. 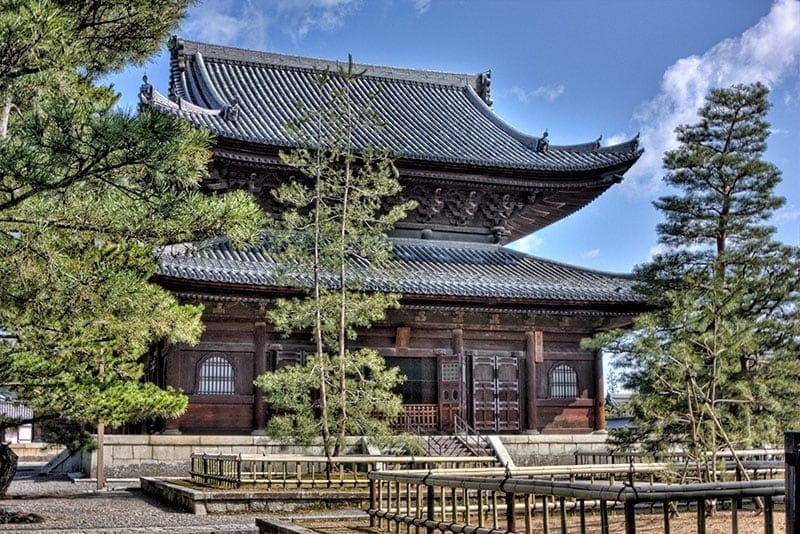 For more on exploring this slightly quieter area of Kyoto you might want to take a look at the Philosophers Path self guided walking tour.

The silver pavillion is not silver, I just need to get that out of the way but it is the cultural home of so many of the zen arts that Kyoto is famous for.  From garden design to architecture, Ikebana to the tea ceremony this temple played a vital role in their development. 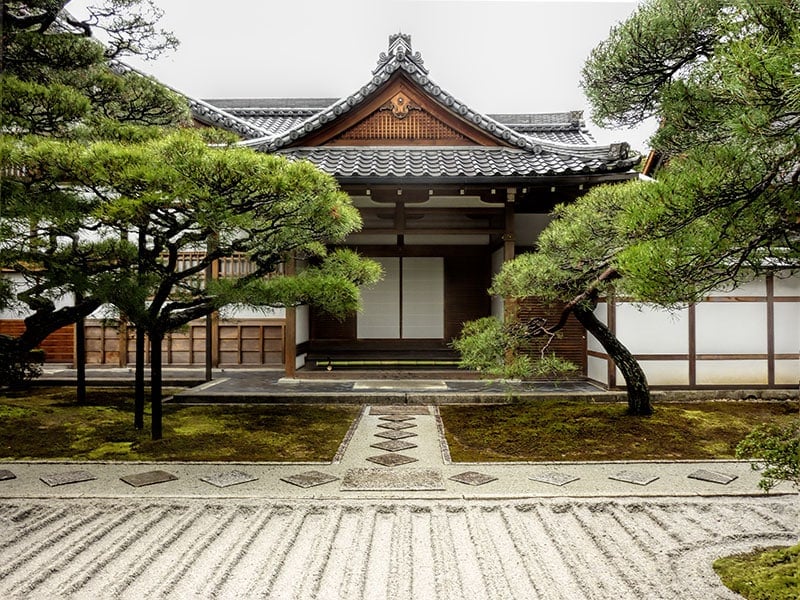 It’s a tough choice but this could be my favourite temple in Kyoto.  It’s a delight from the moment you turn down the road and see the mossy thatched gate in front of you.  I love the purification mounds, the secret garden tucked away behind the temple and the special opening of the temple buildings during camellia season. 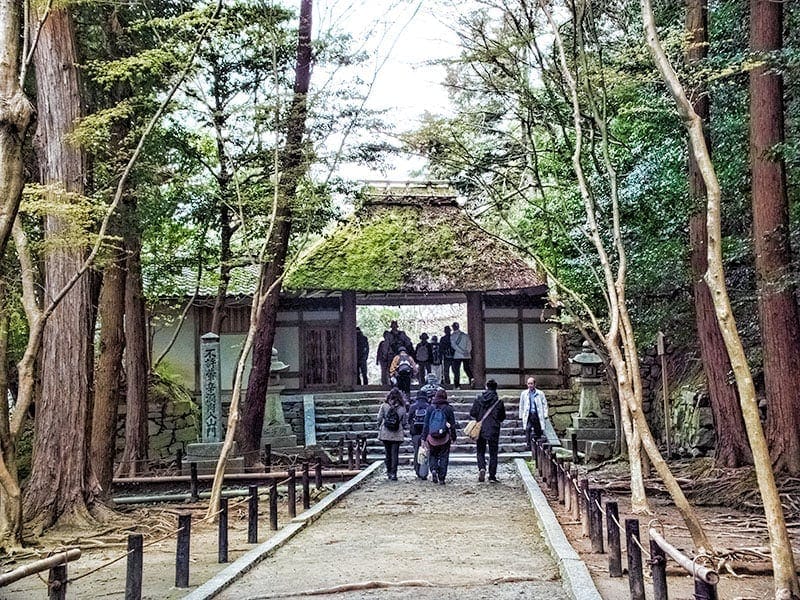 A very beautiful temple during the koyo (autumn leaves) season.  Being set into the hillside the view from the temple out over the red and orange leaves below is striking.  This is the most distinctive building of the temple, the Tahoto pagoda, unfortunately my photo doesn’t do it justice as it’s uniqueness is the squared lower story and round upper story.  Unfortunately the sun strike on the lens from further back just wasn’t giving me many options. 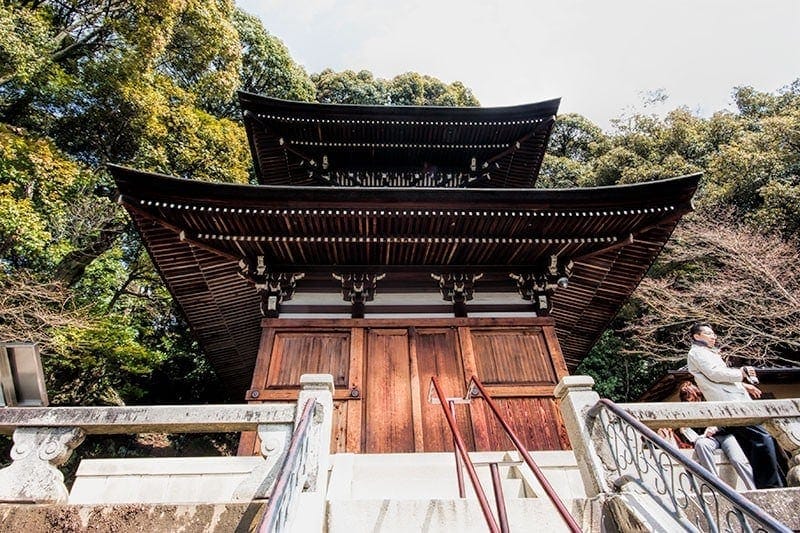 A Zen temple with a bit of everything on a grand scale plus a few additional surprises, the enormous 2 storey gate, lovely gardens and a dramatic European style aqueduct.  Many of the attractions of this temple are free to access and walk around. 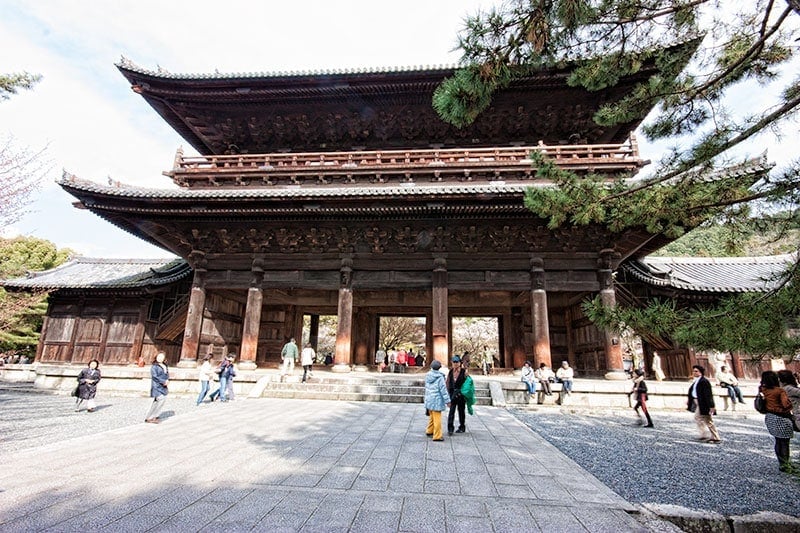 There are many small temples all through Japans cities but there is just one I am covering in central Kyoto and that is because of my love of Ikebana, the Japanese art of flower arranging.  Rokkakudo is located on Karasuma-dori not far from Nishiki market.  The temple has been managed by Priests of the Ikenobo family since ancient times, the masters of Ikebana. 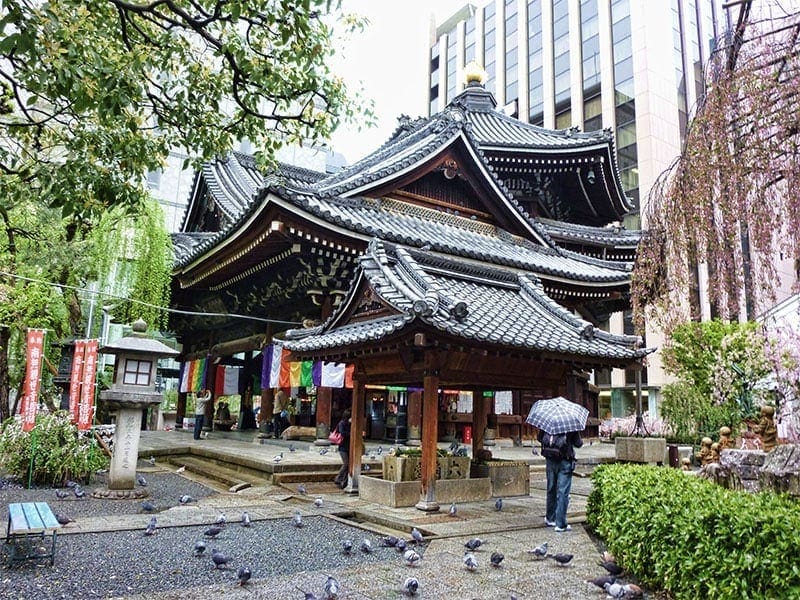 Kiyomizudera is huge temple complex with plenty to explore, it’s always incredibly busy but set on the slopes of the eastern hills it’s not one to be missed.  It’s massive wooden hall and overhang deck has been built without a single nail – and a LOT of people stand on that deck every day.  Drink from the blessed waters and if you are lucky enough to time it right the blue dragon festival days are not to be missed. 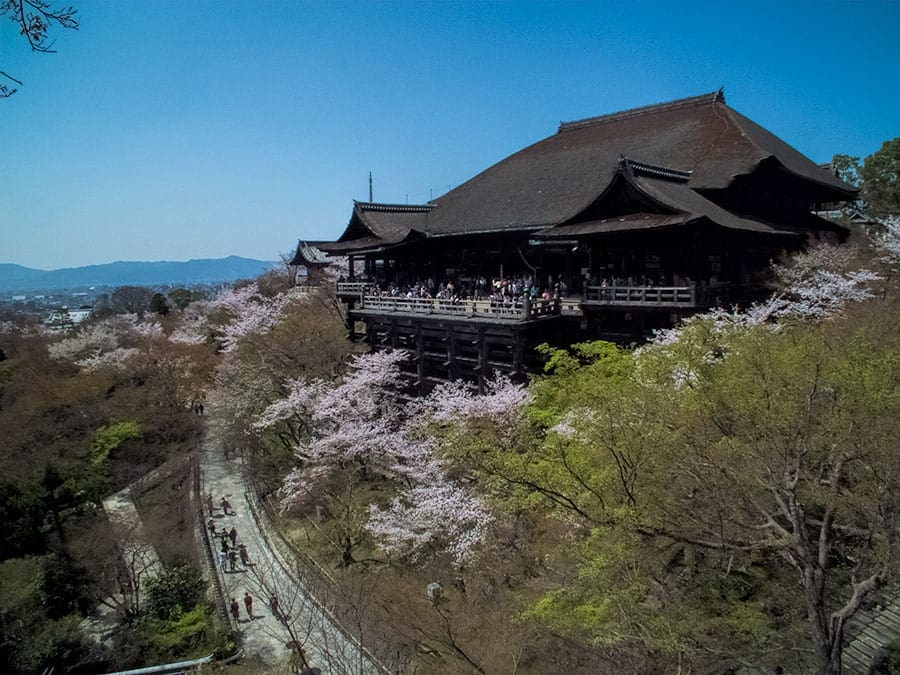 It’s name literally means 33 gen (old Japanese measure) which makes it the longest wooden building in Japan but it’s what’s inside that’s going to blow you away.  Filled with 1000 life size golden bodhisattva statues, it is absolutely amazing.

For me Sanjusangendo is a must see, we came across nothing else like it in our travels across Japan. 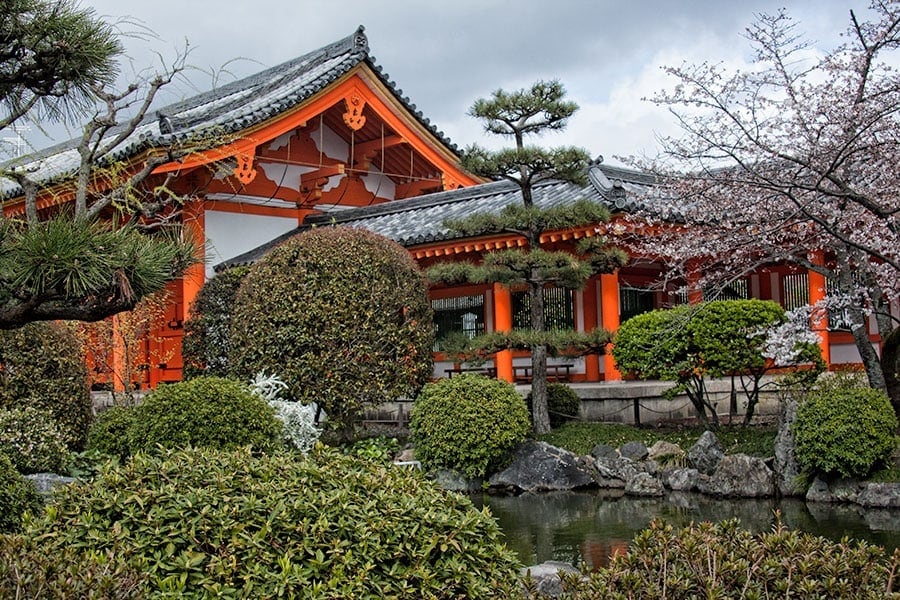 These two are south of the station, one in walking distance, the other best accessed via the subway lines.

Has a dramatic 5 story pagoda which aren’t seen very often in Japan, lovely gardens, lake, mature trees and an impressive treasure hall.  Surprisingly Toji doesn’t seem to feature on many tourists agenda which in itself might be an attraction. (Note – this is an easy walk from Kyoto Station, don’t confuse it with another temple of the same name in the north west of the city) 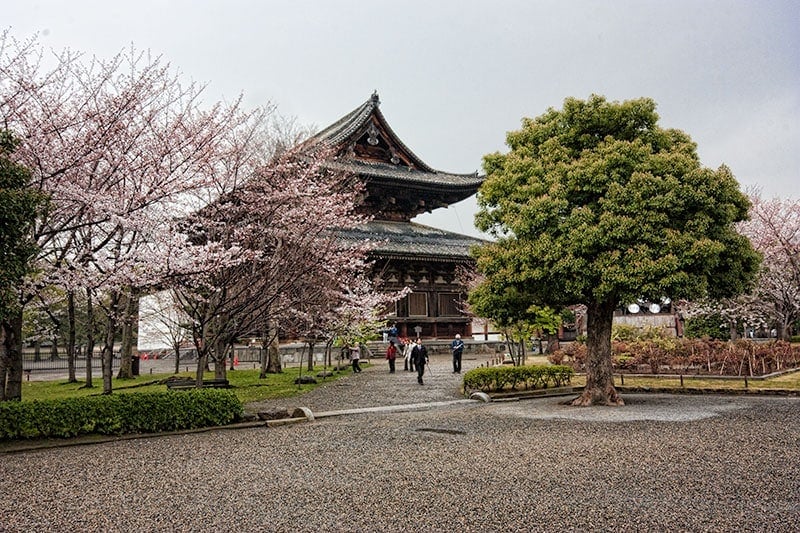 A huge temple complex and UNESCO world heritage site.  This temple has many buildings including a 5 story pagoda, in addition it’s gardens are quite spectacular and there are a number of significant festivals here during the year including the spring recreation of Toyotomi Hideyoshi’s cherry blossom viewing parade.

Arashiyama makes a great day trip or part day if that is what you have available.  We really enjoy the short trip out to the suburbs, you can easily pair up a few temples with the many other attractions on offer.  The usual forms of transport are available but it is best explored on foot or hire a cycle to see some of the sites a little further from the station.

A large Zen temple complex with a stunning garden, it’s the major temple visited in the area and is beautiful but crowded during sakura (blossom) and koyo (autumn leaves) seasons.  Some of the bamboo glades that the area is known for are directly behind the temple. 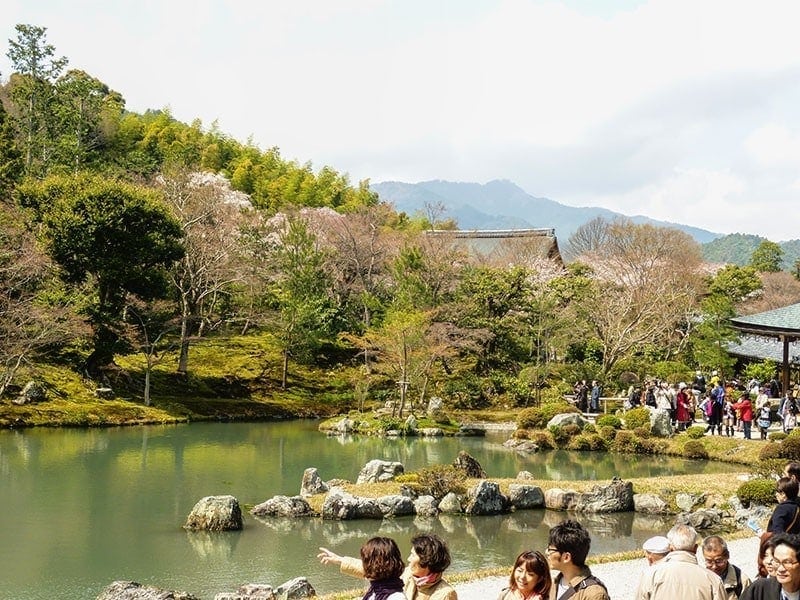 This temple backs on to the forest in the hills behind it but it’s the immaculate moss garden that is striking about a visit here.  It’s a short stop but quite beautiful. 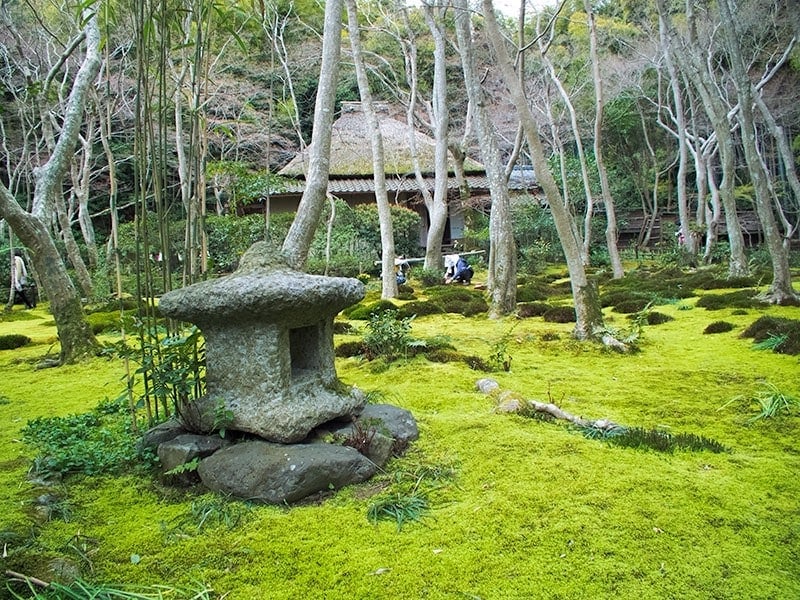 Nembutsu-ji was founded in the 9th century by the monk Kobo Daishi who features heavily in Buddhist history across Japan.  The unique aspect of this temples are the stone statues, Kobo Daishi began placing these for the souls of the dead and they have continued to be added to over the centuries.  Today the temple is home to thousands of stone statues.  At the back of the temple is a short path leading through another bamboo grove. 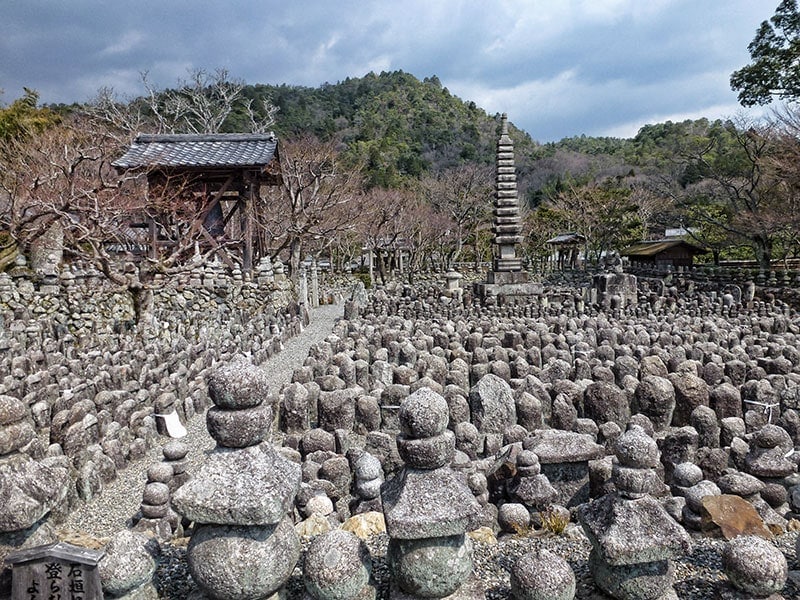 Each of these temples in Kyoto is special to me for its own reasons.  Some for the history, others for their gardens, architecture or a special ceremony we attended.  They are part of the fabric that makes Kyoto unique even within Japan.  While I know my desire to visit so many temples and shrines isn’t shared by everyone I do believe that to skip this aspect completely from a visit to Kyoto would mean missing out on some of the city’s unique magic. 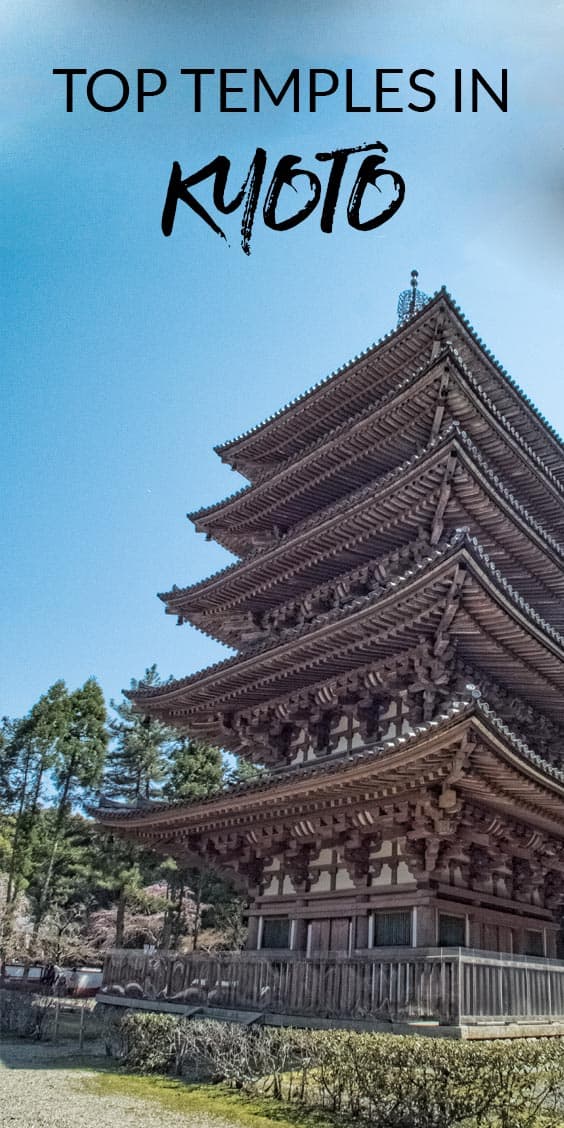 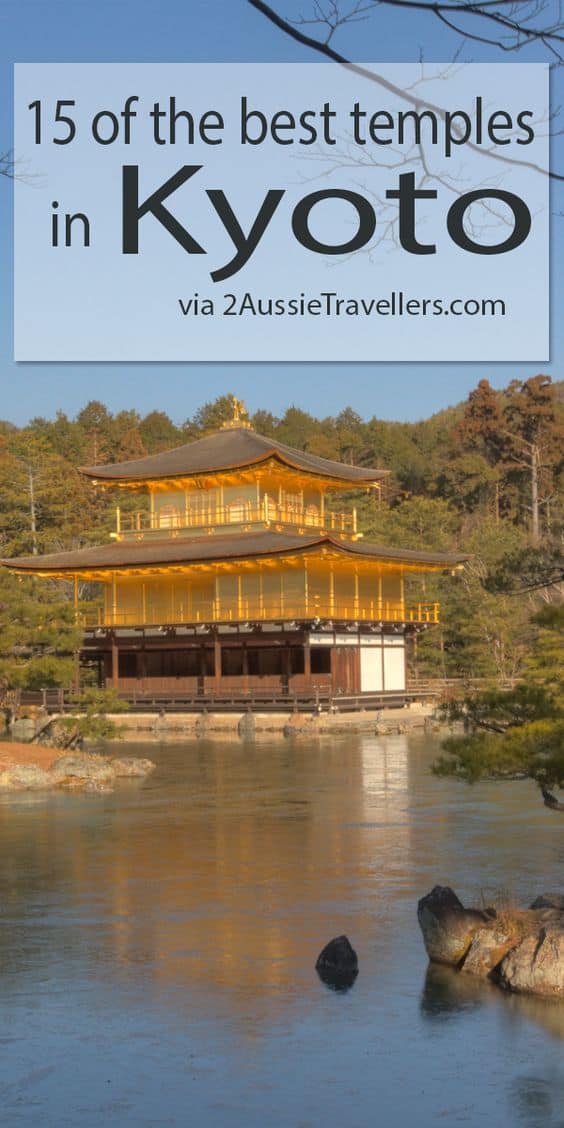 We hope you have the chance to visit some of the beautiful temples in Kyoto during your visit.  If you have one you are particularly looking forward to or a favourite from your own experience we’d love to hear about it in the comments below!